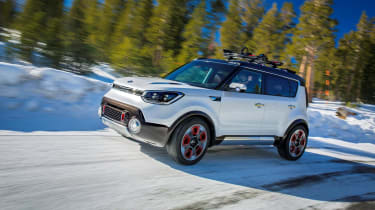 Kia has presented a new take on its Soul crossover at the Chicago auto show. Known as the Trail’ster Concept, the boxy vehicle pairs off-road styling with an all-wheel drive hybrid drivetrain.

Compact crossovers remain one of the fastest-growing segments on the market, and as they become more popular manufacturers are taking interesting steps to diversify their products. For Nissan, that means the Juke Nismo RS, tuned by the firm’s motorsport arm. For others, it's something suave and sophisticated.

Kia’s concept is more ambitious. At its heart is, like the Juke, a 1.6-litre turbocharged four-cylinder powerplant. It develops 185bhp and 185lb ft of torque, with power sent through a six-speed automatic transmission to the front wheels.

At the rear is an electric motor, providing the rear wheels with extra power (to the tune of 35bhp and 100lb ft of torque) and the car as a whole with extra traction. 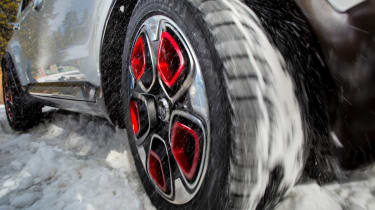 The benefit, says Kia, is that the car can operate as a frugal front-driver most of the time but produces greater power for strong acceleration and extra off-road ability when the going gets tough.

Known as a ‘through the road’ hybrid system – in which there is no mechanical connection between the power sent to either axle – a 1.2 kWh lithium-ion polymer battery pack supplies the electric motor’s occasional boosts of power.

A Hybrid Starter Generator connected to the petrol-powered drivetrain starts and stops the engine as required and aids charging to the battery pack.

Economy would be improved too, of course. While America doesn’t get the frugal diesel models granted to the UK, and expectations are therefore a little different, Kia claims a 25-30 per cent improvement in town driving and 5-10 per cent at open-road speeds over the 2.0-litre petrol model. 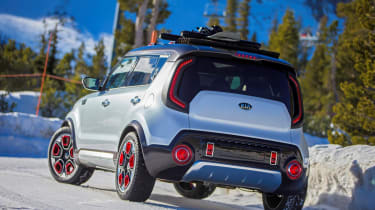 While the Trail’ster’s emphasis is on style – it is a concept car, after all – the car’s 19in alloy wheels still use full snow tyres from Pirelli. A set of KSport coilovers helps suspend the Soul 2.5 inches higher than standard and absorb greater punishment than the standard springs and dampers.

It’s a striking beast, too. The alloy wheels are punctuated by red detailing and the Soul’s front end is transformed by LED units in each headlight and huge round spotlights low on the grille.

There’s a hefty, if rather ornamental-looking skid plate at each end and the car’s round fog lamps are replicated at the rear. And in the roof, painted to contrast with the ‘Polar Pearl Snowdrift’ exterior paintwork, you’ll find a full-length rollback canvas roof.

There are absolutely no plans to produce the Trail’ster as yet, but it does join a roster of impressive concepts (including the Track’ster and GT4 Stinger) and indeed production cars (like the Proceed GT) that show there’s more to Kia than budget city cars.