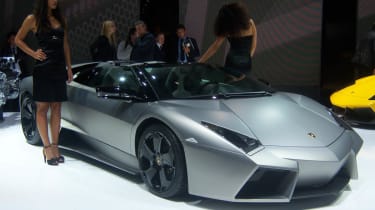 Lamborghini is responsible for the latest dramatic supercar unveil in a mad week for fast cars, with the recession seemingly forgotten at the Frankfurt motor show.

The rather stunning Lamborghini Reventon Roadster is aiming to drag the limelight away from the Ferrari 458, Mercedes SLS and Audi R8 Spyder. It’s the open-top version of the super exclusive supercar Lambo revealed at Frankfurt two years ago.

The Murcielago-based (and jet fighter-influenced) Reventon coupe packs a 641bhp version of Lamborghini’s 6.5-litre V12, but the open top version gets an extra 20bhp to combat its additional 25kg of weight. It's a smart move, ensuring almost identical performance with a 3.4sec sprint to 62mph and 205mph roof-down top speed. Just 20 will be made, costing £970,000 each. Bugatti Veyron money, then.

It'll be 15 times rarer than the Bug, though, with Lamborghini bigging up the Reventon Roadster's exclusivity on its show stand video. You've a one in 700 million chance of owning one they say, meaning you're more likely to get hit by a meteorite. If you were wondering.

We’re reporting live from the Frankfurt show, and you can read about all the goings on at our Frankfurt page.