All 20 examples of the extraordinary Lamborghini Reventon were snapped up by super-rich collectors. So what will they get for their £900,000? 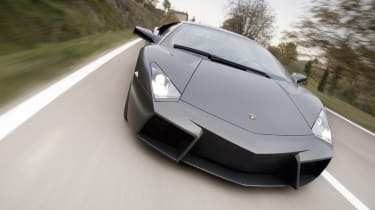 Until I actually ‘locked horns’ with the Lamborghini Reventón, I was pretty sure that there was little of any real significance in this special edition Murciélago LP640. What was of note here had little to do with the product per se and more to do with the status of Lamborghini and its new ability to cash in on its successful image-building campaign. How wrong can you be…

Cast your mind back to the car’s public unveiling at the Frankfurt motor show last September. The Reventón just sort of sat there under the unflattering lights of the show hall. With its flat, dark grey paintwork, the new bodywork looked contrived, almost forced upon the chassis. I left feeling a little sorry for Automobili Lamborghini and slightly cheated considering the price tag of 1 million euros (plus local taxes). I honestly came close to cancelling this test drive a week prior to driving over to Sant’Agata. Fortunately a wiser friend convinced me to keep my appointment.

In the north-central Italian flatlands and Apennine foothills, under the low, hard sun of early Italian spring, so much changes. The ‘Grey Barra’ paint finish (also being called ‘Reventón Grey’ as it appears nowhere else but here and is the only colour the car can wear from the factory) reveals metallic flakes that subtly give off all the colours of the spectrum. Suddenly the forced feeling of the stealth fighter-inspired carbonfibre body panels is gone. The Reventón looks great. But still the price of the car keeps getting in the way. How in hell can this re-skinned LP640 be worth nearly five times the price of the car on which it is based? Regardless of whether I like it or not, my prejudice towards Lamborghini customers continues. Surely they have more money than sense.

Prior to this Reventón experiment there have been a number of rather less interesting ‘limited edition’ Lambos, models like the LP640 Murciélago Versace, the Gallardo Nera and the personalised ‘Privilegio’ models. Closer in spirit to what the Reventón is about were the 2005 Concept S Gallardo and 2006’s overly retro Miura concept. Manfred Fitzgerald, Lamborghini’s director of brand and design, explains the lead-up to Reventón: ‘When we showed the Concept S two-and-a-half years ago, we [the Lamborghini brand] were not yet established well enough image-wise to give that car the go-ahead. Gradually, cars like the Versace and Nera have shown that our image was consistently gaining authority with customers willing to invest.’

Lamborghini executives made the decision to go ahead with the Reventón during the Paris motor show in September 2006 and design and development got under way in Sant’Agata in spring 2007. ‘After a couple of visits to the NATO base at Ghedi near Verona,’ adds Fitzgerald, ‘we all agreed that the most inspiring look was of the F-22A Raptor stealth fighter.’

To give you an indication of how ready Lamborghini’s super-rich fans now were to spend big money, with just a one-quarter scale static model shown to prospective clients at Audi’s design studio in Santa Monica, California, all 20 Reventóns were sold before the car’s Frankfurt debut.

‘Our original thought,’ says Fitzgerald, ‘was to sell just one car to a devoted client. Then we said maybe three, then five, then seven. Before we knew it we had to cap production at 20 cars in order to promise these customers the exclusivity they seek, but we have a waiting list of 20 more people in case someone ever pulls out of their order.’ Deliveries began in January this year and should be finished by October: one to the UK, one each to Switzerland, Germany, Italy, France, Canada, Dubai, Austria and Japan, then 12 to customers in the United States.

With the arrival of the Reventón you can kiss goodbye to any notions of ever seeing a Lambo that looks anything like the 2006 Miura concept. According to sources within the company, all future additions to the product line-up (i.e. beyond the LP560-4 Gallardo driven in this issue) will be bolder and edgier-looking, taking the Reventón as inspiration and steering clear of any sentimentality for the past. Furthermore, with Lamborghini at last paying all of its own bills and reinvesting all of its own profits, all such projects can get the go-ahead and final approval without any intervention from owner Audi or its design centres. So despite all the Audis sitting in the car park at Sant’Agata, Lamborghini is in charge of its own destiny for the first time since the end of the ’60s.

The Reventón is a Murciélago, true, but that’s hardly a bad thing. Talk to any lifetime employee of Lamborghini in Italy and, away from the German owners’ ears, they will tell you that, for them, the LP640 is the only true Lamborghini in the current line-up, while the Gallardo is seen as pure VW/Audi material. It’s important that the people building a car feel a spiritual connection with it, especially in this market, and especially if the car is Italian.

So the striking carbonfibre bodywork is produced almost wholly on-site from the Lamborghini autoclaves. Get up close and you can see the glorious, dry-sump 6.5-litre V12 clearly visible through a louvred glass-laminate cover cut in the arrow shape that reappears all over the car. And from there you’ll notice the new fuel cap bored from aluminium billet. People behind you are entertained by the (again) arrow-shaped and heat-resistant (think of the engine’s proximity) LED brake lights.

Most engaging of all these touches is the digital display that greets you when you’ve settled into the radically reclined bucket seat, covered in green and grey Alcantara. This screen can be switched between a traditional dial scheme and a jet fighter-inspired display that shows revs and gearshifts with such flair that it can be distracting. Then there’s the G-Force Meter, which reveals forward, rearward and lateral g-forces, the latter reaching brief peaks of 1.3g during our drive in this pre-production car, limited, sadly, to just 140kph (87mph).

Torso gripped by the sturdy-feeling seat, the Reventón – no surprise here – drives almost entirely like an LP640 Murciélago. Physically, it remains one of the true heavyweights of the supercar world, yet despite its heaviness and feeling of utter massiveness out on any road, I have always liked the Murciélago’s way of handling its power and torque. And the Reventón feels every bit as good.

Every bit as accelerative too. As with the donor car, acceleration to 62mph is estimated to be 3.4sec with a top speed of 211mph-plus, although Lamborghini’s test drivers admit that during testing at both Nardo in southern Italy and Volkswagen’s test track at Ehra-Lessien, Germany, the Reventón hit 62mph in 3.2sec and touched 213mph. Only the ‘e-gear’ automated version of the six-speed manual gearbox is being offered (word is that the conventional manual ’box will soon be completely eliminated from Lamborghini’s offerings), and the shifts, executed via new carbonfibre paddles, are definitely at their best in the quicker Sport mode.

Wind-tunnel testing has resulted in improved air-flow through the openings all over the new bodywork and a drag coefficient down to 0.27 from the original 0.30, while front and rear downforces at high speed increase for greater stability at the far end of the speedometer. Better air supply is partially responsible for the ten additional horsepower for the Reventón, bringing the total to 641bhp at 8000rpm, with the rev-limiter still set at 8200rpm. The sweet-spot for the best mix of torque and power really doesn’t come until above 5000rpm, when the baffles open and the engine begins to bellow to nape-prickling effect.

As standard, the Reventón comes equipped with the stickier Pirelli P Zero Nero tyres – 245/35 ZR18 front, 335/30 ZR18 rear – and big ceramic-composite brake discs that are both optional on the LP640. Lateral grip is simply huge, and matched by serious stopping power, allowing you to brake late into turns.

At the end of my all-to-brief drive I’m in no doubt that the Reventón is an uncompromised supercar in the finest tradition, and, of course, a major event just to be around. Yes, ultimately it is primarily a piece of collector self-expression. And I still can’t look past the price. But, as Manfred Fitzgerald says, ‘Many people around the world require a practical justification for buying such a car, but buyers in this league are more willing to indulge life. It’s not a question here of straightforward product benefits, but of a work of art. We’re selling dreams.’ 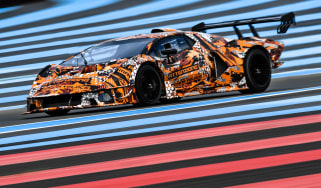