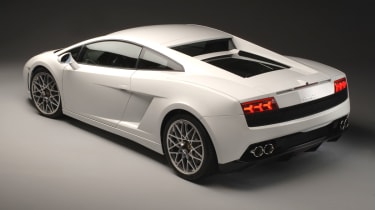 With an annoyingly talented kid brother out to steal your thunder rather too literally (Audi R8 V10, due late 2008), and arch-nemesis Ferrari making your sharpest weapon seem curiously blunt (Scuderia smokes Superleggera, eCoty 2007), it’s perhaps understandable that the Lamborghini Gallardo hasn’t been looking, well, too bullish of late.

The 5-litre, all-drive Gallardo has gone five years without a major update and while Lamborghini might argue that it hasn’t really needed one – ‘baby Lambo’ cachet goes a long way and its V10’s charisma is enough to have seen 7000 Gallardos sold to date – the game has moved on.

But just as staying out for an extra couple of laps on worn tyres is sometimes the right tactic in Formula 1, the decision to wait until this year’s Geneva Show to unveil the Gallardo’s mid-life revisions has found a valuable pocket of clear air in which to hog some serious limelight. To make absolutely sure the world pays attention, the new Gallardo is no mere facelift. It’s not even an exercise in tracking the base-rate power and performance requirements to qualify on the front row of the junior-league supercar grid.

Lamborghini has decided to lever-in a little more action than that, and to mark the occasion it’s given the new Gallardo the iconic ‘LP’ nomenclature (LP standing for Longitudinale Posteriore) currently reserved for the flagship Murciélago. The ‘560’ that follows it signifies – in much the same way a knuckle-duster signifies – the fate that awaits any Ferrari 430 Scuderia or Porsche 911 GT2 that fancies a scrap. (And then there’s the ‘4’ in LP560-4, which might just suggest the intriguing possibility of a two-wheel-drive Gallardo somewhere down the line.) Whether it’s an Oscar-winning performance we’ll have to wait and see, but there will be blood. This is why.

The LP560 is heavier than its stripped-out sibling, but 20 kilos lighter than the outgoing ‘cooking’ Gallardo, so its power-to-weight ratio of 374bhp per ton is practically identical to the Superleggera’s. As is its claimed 0-100kph (0-62mph) time of 3.7sec, which is a couple of tenths quicker than the factory’s figure for the current regular car. By 200kph (124mph) the gap has grown to half a second.

Along with the aesthetic, mechanical and electrical systems changes introduced for the new model, it’s all designed to administer a short, sharp slap-down to the embarrassingly brilliant Gallardo-based Audi R8 which, for the time being, is pegged to eight cylinders and 414bhp, and to propel the Gallardo back into pole position on that junior exotic grid.

It’s also a psychological blow to Ferrari and Porsche. Lamborghini has reloaded and its new standard ammunition, the basic Gallardo coupe, is comfortably more powerful than the most extreme versions of the 430 and 911.

The headline power figures don’t tell the whole story, of course. In reality, the fight in a straight line will be pretty even, despite the 430 Scuderia and 911 GT2 trailing the Lambo by 49 and 29bhp respectively. Both weigh substantially less than the four-wheel drive Gallardo and have very similar power-to-weight ratios. The Ferrari’s is slightly better at 378bhp per ton, the Porsche’s only a few points adrift at 369bhp per ton. In a drag race, they’d be hard to separate.

Walter da Silva’s re-style is subtle, accentuating the angularity of the air vents at the front with a splitter-style treatment reminiscent of the Reventon’s and softening the previously blocky, upright appearance of the rear with new rectangular tail-lights and much cleaner, less fussy surfaces. (The same can’t be said for the 20-spoke wheels, though.) The Gallardo’s interior architecture is unchanged.

Under the skin, the aluminium body structure has been reinforced for extra rigidity, the four-wheel-drive drivetrain is lighter and the e-gear sequential paddle-shift (an area desperately in need of improvement) re-worked for speed and smoothness. Unsurprisingly, the improvements made to the Gallardo’s platform for the Audi R8, including the rear suspension, have been fed back into the Lamborghini.