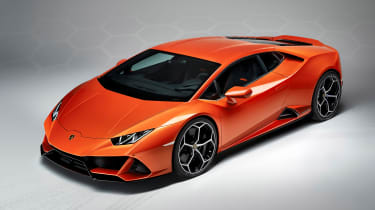 Lamborghini has revealed official pictures and details of its updated Huracan EVO before the car’s public reveal at this year’s Geneva motor show. The changes on the car combine a suite of aesthetic, mechanical and technological upgrades, borrowed from both the hardcore Performante’ and the bigger Aventador S.

To start with, Lamborghini has fitted the new Huracan EVO with the same updated 5204cc naturally aspirated V10 engine as the Performante’, sharing identical figures with 631bhp at 8000rpm, and 442lb ft of torque at 6500rpm (30bhp and 29lb up on the old Huracan LP-610). The engine is paired to a seven-speed dual-clutch gearbox, channelling power to all-four wheels with the aid of a rear axle-mounted limited slip differential.

> Click here for more on the Lamborghini Aventador SVJ

From here the Lamborghini Huracan EVO’s technical make-up starts to take a different path, as this is the first ten-cylinder Lamborghini to include rear-wheel steering. Adopted from the Huracan’s larger siblings, the set-up works in conjunction with a new central ‘dynamics control’ system that combines each of the chassis’ active control operations through a single ‘brain’.

Put simply, the new Huracan EVO’s rear-wheel steering, variable ratio ‘dynamic steering’, magnetorheological dampers, traction and stability control, transmission and braking systems are all now controlled via a new central computer. That computer not only calibrates each parameter to best suit the conditions and selected driver mode, but actively predicts them too. Lamborghini has also integrated power torque vectoring for the first time, a major new feature that should help reduce the previous Huracan’s propensity to understeer, shuffling power to where it’s needed (or wanted) most, more of the time.

Despite the EVO weighing an additional 40kg over the Performante (1422kg ‘dry’), performance figures are largely identical, the car reaching 62mph in just 2.9sec, and 124mph just one tenth slower at 9sec flat. Top speed is also rated in excess of 201mph, as per the Performate.

Lamborghini has also applied some aesthetic changes including more complex front and rear bumpers. The rear fascia is probably the most distinctive aspect, as the Huracan EVO shares its high-mounted exhaust outlets with the Performante’ - with a larger, more aggressively contoured diffuser below. The new engine cover also integrates a ducktail spoiler at the body’s leading edge, a new design element for a modern Lamborghini.

Look closely and you’ll also see new sills, and more structured upper side intakes protruding from the area behind the rear quarter glass. Lamborghini’s clever ‘ALA’ active aerodynamics are not in use here, being reserved for more track-oriented models like the Performante’ and Aventador SVJ.

Lamborghini has made substantial changes to the interior, with an emphasis on upgraded tech and materials. The basic dashboard is the same, but rather than the central ‘bridge’ containing a set of hard (Audi-derived) buttons, it now features a new 8.4-inch portrait style display, controlling all of the Huracan EVO’s major functions, including its complex driver mode system. The new infotainment system is bespoke to the new Huracan (for now), and should answer the calls for a more glamorous interior, after the previous model was considered a little too pared back and simple. We expect the Audi-sourced ‘Virtual Cockpit’ and central rocker switches to remain.

Priced from £198k in the UK, what was once a Ferrari 458 and McLaren 12C rival has now ostensibly fallen well behind those cars’ successors - the 488 GTB and 720S - both in terms of power and price. The new Huracan EVO appears, on paper, to go some way towards putting that right. It still sits £40k above rivals like the McLaren 570S Track Pack, but only £15k more than the excellent new McLaren 600LT.