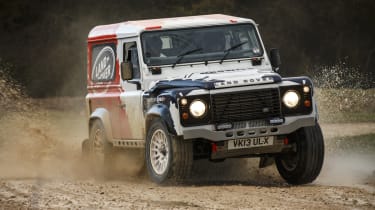 The Land Rover Defender Challenge, a Bowler-prepared 4x4 that forms the basis of a new and intriguing motorsport series.

The Defender Challenge is a bit like the Caterham Academy for rally raid. This year sees the Challenge’s inaugural season, which will run over a mixture of classic gravel rallies as well as some hill rallies. And if most people get into their Caterhams dreaming of Le Mans, then most of the Defender Challenge drivers will get into their Bowler-prepared steeds with half an eye on the Dakar. The difference, of course, is that whereas the only Caterhams at Le Mans are in the campsites, this FIA-approved Defender could actually take part in the Dakar for real. You’ll need £60,000 for the Defender, and another £10,000 to cover entry fees.

Usually when you clamber over a roll-cage, you’re getting down into a car, not climbing up. Likewise, when your abdomen and thighs are being clenched by a racing bucket seat, most of the time your view out is down around waist level rather than high enough to look a carthorse in the eye. But this is the slightly surreal world of a competition Land Rover.

Although it’s got a roll-cage and an Alcantara steering wheel with a yellow ‘straight ahead’ strip at the top, it also has a 170bhp 2.2-litre diesel under the bonnet, so it isn’t fast. The six-speed manual gearbox requires fairly frequent stirring to make the most of the engine too, because the 332lb ft of torque (up from 265lb ft in the standard car) arrives in a shortish mid-range rush. Bumps are tackled by Bowler’s heavy-duty racing spring, damper, bush and anti-roll bar upgrades, and although they don’t create anything like the magic carpet ride you get in one of its full-on EXRs, they certainly soak up off-road punishment.

The gravel loop of the Gaydon off-road course feels tight in places when you’re perched up high and trying to manhandle a 1771kg Defender quickly. My first thought is that given this car is for novices, it is not an easy thing to get the hang of. The short wheelbase means that it’s pretty lively when it lets go, and on the brakes it will happily and quickly pitch sideways. Under power it largely wants to understeer and all of a sudden 170bhp feels more than ample.

On my second lap things improve and I get the hang of it slightly more, but it still feels fairly intimidating trying to stay on top (literally) of the short wheelbase with the relatively slow steering. The trick is to keep inputs to a minimum, making use of the cambers and cuts as much as possible to maintain speed and getting the car to slide very neutrally if possible. The Defender also teaches you to be incredibly sensitive to the loading the front tyres can take (not much) and to work around that.

The litmus test for something like this is how you feel once the madness stops and you get out. My instant reaction is that I want to get straight back in and keep learning what feels like a whole new set of skills, and that’s without even tackling the nuances of a more extreme hill rally.

Purely as a car, there is nothing to compare it to – if you want to spend BMW M3 money on a Land Rover Defender, there are countless tuning companies – Twisted being one of the most prolific at the moment – who’ll craft something very special for that sort of money.

As an entry-level championship, the Challenge is also a fairly unique proposition. If you want to spend a season rallying but don’t have such a big budget, there are plenty of options if you’re feeling adventurous, detailed on the Go Motorsport website.

The UK series is made up of seven rounds, combining hill and stage rallies, spread across the country throughout 2014. Entrants are also able to compete in rallies in Europe and North Africa alongside the Bowler Works team.

The first round has already taken place in Wales, with round two, in Somerset, on April 12. Events follow in Nottinghamshire, Swansea, Shropshire and Dorset before the Defender Challenge finale at the Scottish Borders hill rally on November 22/23.