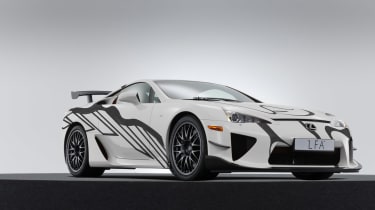 The LFA was something of a bolt from the blue from Lexus, a company predominantly known until then for luxurious and long-lasting, but rarely exciting, saloons.

It’s little surprise then that Lexus still references the LFA so many years after its launch, with its latest outing in art car form celebrating ten years of the “F” brand, which actually kicked off with the IS-F sports saloon in 2008.

> Lexus LFA: history, review and specs of an icon

The LFA is more celebrated though, as much for its rarity - only 500 cars were ever made - as for its remarkable high-revving 4.8-litre V10 powerplant, co-developed with Yamaha and never again used in any other Lexus, and this recognition makes it the ideal choice for an art car.

The work itself is by Portuguese artist Pedro Henriques, who describes the curved, organic patterns on the otherwise origami-sharp LFA as being influenced by ‘the idea of fluidity that’s present in contemporary life, where things are in constant movement and it is hard to freeze anything.’ 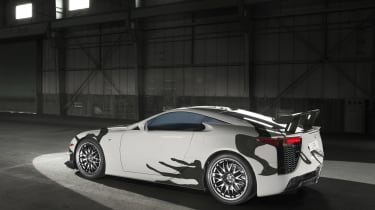 It’s perhaps not the most dramatic art car we’ve seen, lacking the impact of Calder or Warhol’s BMWs, Tobias Rehberger’s trippy Aston Martin Vantage race car or the distinctive Paul Smith 911 seen recently at the Goodwood Festival of Speed, but then the LFA itself gives the eyes plenty to take in, so perhaps the subtle approach is best.

Henriques says his work has the effect of giving the LFA the look of constant mutation and a less defined shape, and lines that never stop. You’ll be able to see for yourself whether that’s the case when the car makes its debut at the 24 Hours of Spa this weekend, where Lexus’ own RC F GT3 will be making its debut as part of the Blancpain series.

Alternatively if you find yourself around Lisbon (there are some great roads in the vicinity), Lexus has opened a pop-up UX art space, with some of Henriques’ other works among the exhibits. We’d be happy just with the LFA...