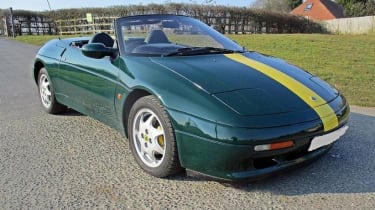 This week we’ve driven both the Fiat 124 and its Abarth cousin, and discovered cars of greater aggression and a different character to the MX-5 on which both are based.

Some of that can be traced to the Fiat-specific powerplant, a 1.4-litre turbocharged unit as found in Abarth 500s, and others in the Fiat group.

But that’s to be expected - turbocharging is a very different way of extracting performance from a car to natural aspiration, and can push a small, lightweight roadster down the road with increased vigour.

Back in the 1990s, Lotus also experimented with turbocharging a small, lightweight roadster, though its attempt couldn’t have been more different from the contemporary MX-5, since that turbocharged thrust powered the front wheels.

Not all Elan ‘M100’s were turbocharged, but the majority were, and the unusual choice of front-wheel drive was - as you might expect from Lotus - selected for sound performance reasons, with more predictable high-speed handling than a rear-drive car and improved traction. 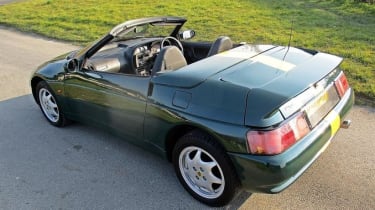 If there was a criticism, it’s the same we discovered when comparing the best-handling front-wheel drive cars of all time in evo 095 - it’s not quite as involving as a rear-drive car. ‘You feel detached...you don’t seem to be able to make much difference to its balance’ said Jethro Bovingdon at the time.

The unfashionability of its layout means Elans are currently one of the most affordable ways of putting a Lotus on the driveway. This example on sale at Codmore Hill Garage in West Sussex, through Classic and Performance Car, is a case in point: It costs £7995.

The Elan’s wedgy styling as long been an acquired taste but there’s some visual interest here with the British Racing Green paint scheme and an oh-so-Lotus yellow stripe down the centreline of the car, while the cabin is more modern than those early MX-5s and far more cossetting than that of the Elise that replaced the Elan in 1996.

Ultimately, time has proven that traditional rear-wheel drive (and no doubt the benefits of Japanese build quality) is the more successful formula for a sports car. Few have attempted it since - Fiat’s 1990s Barchetta, an Audi TT here or there and the tiny Daihatsu Copen are among the few that have.

But putting a turbocharged engine into a sports car? As the 124 demonstrates, that’s certainly stood the test of time.

> Find Lotus Elans for sale on Classic and Performance Car