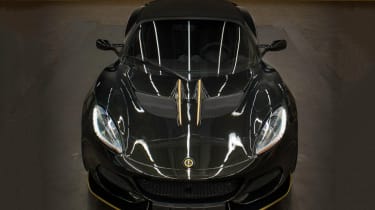 Lotus is turning 70 in 2018, and to mark the milestone it’s revealed two celebratory models  based on the Elise and Exige. However, Lotus is yet to price either model.

Production of the Lotus Exige 70th Edition will be limited to 40 examples and be available in either 350 Sport or 380 Sport guise. Buyers will also have the choice between three colour schemes: Empire Green, Essex Blue and Monaco White. Inside, ‘Lotus 70’ has been stitched into the headrests, in red, of the alcantara bucket seats, the same wording is stickered down the side of the car, ahead of the rear wheel arch.

No official spec sheets or performance stats have been disclosed, but it’s likely they will deliver the same performance as the standards models. Both the 350 and 380 use the same supercharged, 3.5-litre V6 engine, the latter’s in a slightly higher state of tune yielding 375bhp and 302lb ft of torque, as opposed to the former’s 345bhp and 295lb ft. Both cover the 0-62mph dash in less than 4sec and can hit 170mph.

It wouldn’t be a proper Lotus celebration without the traditional colours of black and gold, which have been applied to the Lotus Elise 250 Cup  GP Edition inside and out. Echoing the Team Lotus 72 F1 car, the exterior has gold, accents and wheels that are set against the black base colour, while in the cabin you’ll find plenty of gold-stitched leather and alcantara and the Lotus crest embroidered into the headrests. Elsewhere, there’s a nod to the Hethel-based manufacturer's 13 Formula 1 titles (seven constructors' championships and six drivers' championships). Lotus has not revealed how many will be built.

Based on the Elise Cup 250 the performance is impressive. The 1.8-litre supercharged four-pot develops 243bhp and 184lb ft of torque, helping it sprint from 0 to 62mph in 4.3sec and reach a 154mph top speed.