Maserati reveals details on a new GranTurismo Sport model, to be launched at Geneva 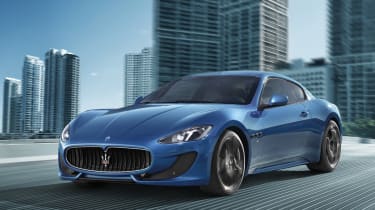 Ahead of an official Geneva reveal, Maserati has announced it is about to replace its GranTurismo S automatic and MC-Shift models with a substantially revised model, to be known as the GranTurismo ‘Sport’. The S is currently the company's biggest selling coupe, and although prices have not been set yet, we understand they will remain around the £90,000 mark when the car arrives in UK showrooms in September. European LHD markets will get the first cars, which are expected to go on sale in June.

The new model gets a re-worked version of the fabulously vocal 4.7-litre V8 already found in the current ‘S’ models, with peak power rising from 433bhp to 454bhp. This same engine will also be used in the hardcore MC Stradale GranTurismo, which will get the engine first a few months after the Geneva reveal. As with the current GranTurismo S, Maserati will offer the Sport with either the conventional six-speed ZF automatic transmission, or the option of the more sporting six-speed sequential transaxle used in the current MC-Shift GranTurismo ‘S’ model.

In addition to these mechanical changes, Sport models will feature a revised front bumper design which is said to improve both engine and brake cooling without increasing drag but, to our eyes at least, does little to improve the looks of the car itself. Other changes on the ‘Sport’ include a new steering wheel design, better front seats, new front LED running lights and lightly smoked taillights.

Like the current 'S' model, the Sport will sit between the 4.2 GranTurismo and rather more specialist MC Stradale when it arrives in showrooms later this year.

Full performance and pricing details will be released at the Geneva motor show on 6 March.