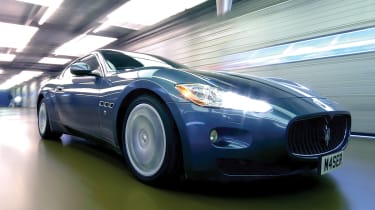 Over the years, Maserati has created some exceptional cars, as well as some that are best described as ‘characterful’. However, perhaps the company’s greatest achievement in recent years is the GranTurismo, a sleek and sensuous coupe that evolved from the Quattroporte platform.

The GranTurismo debuted in 2007, and while it shared its 4.2-litre V8 and six-speed ZF automatic transmission with the QP, it was the stunning bodywork – once again originating from the Pininfarina studio – that would affect heart-rates the most.

While the engine’s 399bhp and 339lb ft made it a competent performer, many felt that it lacked the low- to mid-range strength you’d expect from a large V8. It was a good thing, then, that the engine really came into its own when revved, with a smooth and progressive delivery accompanied by a glorious howl from the quadruple tailpipes.

The traditional automatic gearbox used by the first variant of the GranTurismo was mounted on the rear of the engine, helping to give the car a perfect 50/50 front/rear weight distribution. The standard dampers were fixed items, but Maserati’s ‘Skyhook’ adaptive damping was available as an option. Press the Sport button, which also sharpens throttle response and tweaks the transmission for quicker shifts, and Skyhook tightens the chassis immediately, but it also constantly adapts to the road conditions and the driving style to provide optimum handling.

The GranTurismo’s interior lives up to the promises of the exterior. There are four seats, each capable of housing an adult, and the ergonomics and materials are, as you’d expect, superb. The switchgear has always been criticised for lacking the quality feel of the rest of the car, but that’s a fairly small price to pay for the overall experience.

The GranTurismo range was complemented by the introduction of the ‘S’ in 2008, which in addition to increasing the engine size to 4.7 litres and its outputs to 433bhp and 361lb ft, saw the car adopt the Cambiocorsa paddleshift manual transmission from the GranSport. With a transaxle layout, this brought a slight rearward bias to the weight distribution. An automatic version of the S was introduced in 2009, and in 2010 the open-topped GranCabrio arrived.

Whatever version you go for, the end result is a car that fully deserves the iconic trident badge. It’s a genuine GT; too large to be a back-road racer, but perfectly suited to smooth, flowing, fast A-roads.

When it comes to combining style, passion, performance and, now, reliability, there are few that can match the Maserati GranTurismo.

Harry Metcalfe - ‘I actually bought, sold and then bought back the same 2007 GranTurismo, all in the space of a couple of years. Madness, really, but I missed it badly after letting it go and the second owner kindly rode a chunk of the depreciation curve on my behalf…

‘I instantly fell in love with both the looks and the way the GranTurismo offers proper seating for four adults. With two teenage kids to haul around, that’s extremely useful.

‘I ordered my car on the standard 19in wheels, as I felt the ride was better on these than the optional 20s. I wonder if the Skyhook suspension was worth the extra outlay, though, as I don’t like the way the ride goes to pot once you press the Sport button. Also, Bluetooth wasn’t available at the time but was later. Annoying.

‘Servicing might seem expensive but at least it’s only every two years if you keep the miles down. Tyres don’t seem to last long, though, with replacements needed every 12,000 miles or so.

‘Would I buy another? Yes. That’s why I bought mine back again…’