Going against the grain of the C-segment a little, Mazda's petrol engines for the 3 are not turbocharged, the Japanese company sticking with natural aspiration and instead upping capacity. It reckons that other fuel-saving measures help maintain competitiveness in terms of efficiency.

So there are 1.5- and 2.0-litre petrol options, both four-cylinder units. The 1.5 produces 99bhp and a modest 111lb ft of torque and it's mated to a slick six-speed manual gearbox. The 2.0-litre can be had in 118- or 163bhp guises, both producing 155lb ft of torque. A six-speed automatic is optional with the lower-powered version.

It's worth noting that renowned Mazda tuning firm BBR has already announced a tuning package for the 118bhp petrol car, lifting its output to as much as 185bhp with a new engine chip, exhaust manifold, induction system and sports exhaust. 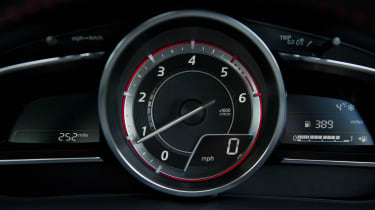 Maximum power is developed at 6300rpm and there's more torque too, with 173lb ft at 4000rpm and a spread of 150lb ft between 3000-6500rpm. It still won't match the best hot hatchbacks, but it should endow the 3 with extra pep in its step. And at a little more than £2000 on the already well-priced 3, it could be a fun (and naturally-aspirated) alternative to the current hot hatch crop.

The best standard engine in the line-up is the 2.2-litre twin-turbo four-cylinder diesel, which can be paired with either manual or automatic transmissions - both with six ratios. Peak outputs are 148bhp at 4500rpm and 280lb ft of torque at 1800rpm. All Mazda3s send their power to the front wheels.