The previous Mazda3 was doing well if it was compared with cars like the Hyundai i30, Toyota Auris and Kia cee'd, but this one deserves to be considered alongside the current class leaders, Ford's Focus and the Volkswagen Golf.

For £600 more there's the SE Nav featuring, you've guessed it, satnav - with European mapping and three years of updates included. The SE-L (available with the 2.0-litre 118bhp engine as its entry point) starts at £18,895 and adds dual-zone climate control, auto lights with bi-Xenon, rear parking sensors and aesthetic improvements inside and out. There's SE-L Nav for £600 more too.

Next up is Sport Nav from £20,445. Where applicable the Fastback is identically-priced to the hatchback (though starts at £300 more, with no entry-level 99bhp model in the range), while an automatic transmission costs £1200 more than a manual and the entry-level diesel option is the auspiciously well-priced SE at £18,895. 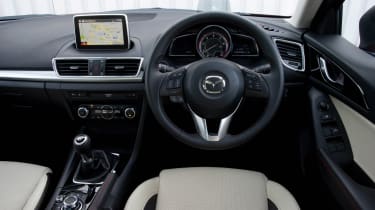 The Golf is still the benchmark in this sector, combining neat handling with strong economy figures and a quality cabin. The Focus is a strong competitor too though cooking models aren't as good to drive as they once were, and despite a facelift a few years back, the Ford's cabin is still a confusing mess of buttons. It's probably even better value than the top diesel Mazda though, given that £22,745 gets you behind the wheel of a Focus ST TDCi with 182bhp - a car that we rate quite highly.

Renault's new Megane and the Peugeot 308 are also both worth your attention. The former is another step up in quality and tech over the car it replaces, and in GT trim with four-wheel steering it's very nimble indeed for a car of its size. The 308 is a deft handler and has one of the better cabins in this class, if you can get used to the 'iCockpit' layout with its small, low-set steering wheel. It too has a GT Line trim which sits below the full-fat GTI.