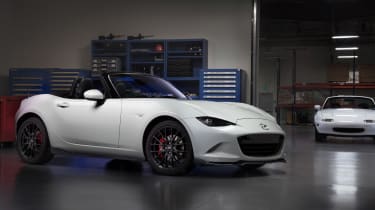 Mazda has launched a range of accessories for the all-new MX-5 at the 2015 Chicago auto show.

Buyers of the as-yet unreleased roadster will be able to specify a range of options to enhance the styling and aspects of the car’s performance.

The white show car features a wide range of available accessories. Most obvious are the new forged 17x7in BBS alloy wheels with a 45mm offset, wrapped in 205/45 R17 tyres, and a full aero kit designed to evoke the recent MX-5 Global Cup Car. 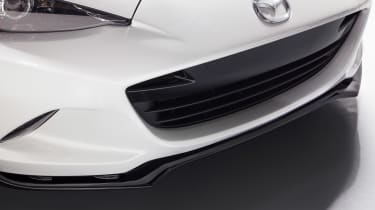 The kit includes a front lower splitter, side sill extensions, a rear bumper skirt and a subtle lip spoiler atop the boot lid. The wheels too are reminiscent of those on the race car.

A set of Brembo brakes is also presented on the concept, denoted by red calipers. Less transformative but equally useful for some customers will be the optional luggage rack, here constructed from carbonfibre and weighing little over 900 grams.

The luggage rack is illustrative of Mazda’s desire to reduce weight in the new MX-5. At nigh-on a metric ton the new car is 100kg lighter than its immediate predecessor, and within a whisker of the flyweight original – despite 26 years of advancement in safety technology conspiring to pile on the pounds.

It’s compact too, 30mm shorter than the 1989 original, while the 1.5-litre Skyactiv engine available initially displaces 100cc less than that of early MX-5s. The 129bhp output is 15bhp more than its historical predecessor, but a 2.0-litre, 155bhp four will also be available for those craving extra performance.

The Chicago auto show is historically significant for Mazda’s little roadster – it was there in 1989 that the original MX-5, known as the Miata in the United States, made its debut to the world’s press.