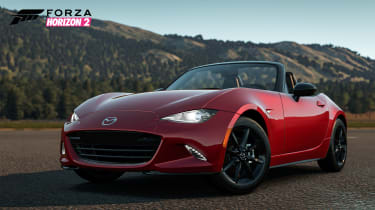 As is tradition these days, the first taste most people will get of an all-new car is through the medium of videogames, as the Mk4 Mazda MX-5 becomes the latest downloadable vehicle for Forza Horizon 2.

The latest car lands as part of a dedicated Mazda MX-5 car pack. As well as the all-new car, the pack also includes the 2010 MX-5 Super20 SEMA concept car, an original 1990 MX-5 and the turbocharged 2005 Mazdaspeed MX-5 sold in the United States.

As part of a Time Trials Rivals Contest, Forza Horizon 2 players can also compete to win a real MX-5. Gamers must watch an MX-5 ad located in one of the Xbox’s channels, enter the contest, and then participate in the MX-5 Challenge in the game itself.

A time trial around the game’s Sisteron Perimeter Sprint Track will be used to select the two fastest players, both of whom will fly to Los Angeles in June to compete head-to-head for the real car.