As Mazda reveals pricing for the new MX-5 RF, we revisit a previous MX-5 concept 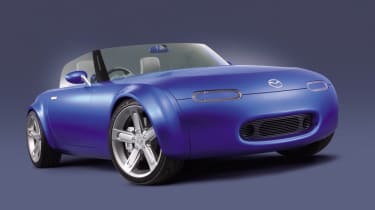 Minimal size and light weight have always been key tenets of the Mazda MX-5. Even the latest model, the Mazda MX-5 RF with its coupe-style folding roof, is smaller than its predecessor.

But in an ideal world, Mazda would surely make the MX-5 even smaller and lighter. Such a car was previewed in the Ibuki concept, which made its debut at the 2004 Chicago auto show.

The Ibuki is unique in our concept car retrospectives so far in that it's the only one to have directly inspired a production car - in this case, the third-generation 'NC' MX-5 launched in 2005.

But that production car probably strayed the furthest from the concept's ethos of any MX-5 so far, being the largest and heaviest of all MX-5s. It's taken the current fourth-generation model to shed both size and weight back to first-generation levels, and it's all the better for it.

Comparing the fourth-gen ND MX-5 with the Ibuki makes for interesting reading: The concept that previewed the largest MX-5 is almost a foot shorter than the ND, marginally narrower, and a touch lower. The compact proportions of the concept were rendered even more diminutive by the use of 18-inch alloy wheels - an inch larger than the biggest wheels available on the current car. 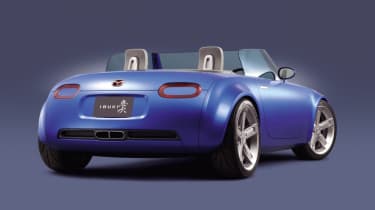 The simple shape seems refreshing today too. While the current car is probably more classically attractive than any previous MX-5 (angry, squinting headlights aside) with its elegant curves and strong proportions, the Ibuki was perhaps a better nod to the original, Lotus-inspired design than the production car that followed.

The interior was simple too, with seats that blend into the rear bulkhead and the airiness of a speedster-style chopped windscreen. Mazda's focus on both weight and weight distribution was apparent in the use of plastic body panels, and the positioning of the air conditioning system in the rear of the car to balance weight.

It had a smaller engine than the eventual production cars too, at 1.6 litres rather than 1.8 and 2.0. The four-pot was front-mid mounted - best for weight distribution - and Mazda showed an early interest in hybrid drivetrains, the Ibuki using a motor/generator (a little like the first-generation Honda Insight) to start, stop and assist the engine. Despite that, the Ibuki used another MX-5 hallmark: a manual transmission.

Reading the Ibuki's specification list, it's remarkable that Mazda has remained true to the original MX-5 ethos for so long, whether conceptually or in its production cars. It may be the best part of a decade before we see the next car, but if Mazda implements some aspects of that 2004 concept, we'd probably not complain.