Dreaming of the summer: Mazda MX-5 generations driven at Goodwood 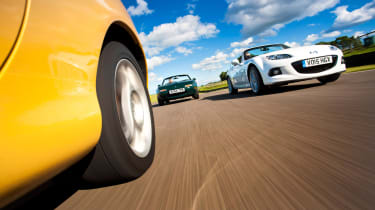 September 1989. The Dodge Viper RT/10 makes its debut at the Chicago motor show. Its immense eight-litre V10 develops 400bhp and it’s wrapped in a glassfibre body so muscular as to make TVRs look malnourished.

Why then were all eyes on the delicate Japanese roadster across the hall? The one with a power output little more than a quarter of the Viper’s and rolling on wheels that, to this day, are referred to as ‘daisies’? The Goodwood Motor Circuit on a windy Monday morning seems a world away from the glitz of an international motor show, but the quaint surroundings are somehow an appropriate environment to explore the MX-5’s appeal.

Its links with the 1960s sports cars that inspired it have been endlessly repeated. The Lotus Elan-like body. The exhaust note, tuned by Mazda to mimic that of old Triumphs and MGBs. And the gleeful pop-up headlights and curved lower intake? They’re not unlike the slightly gormless face of an Austin-Healey ‘Frogeye’ Sprite.

If early MX-5s don’t quite match an original Elan Sprint on paper, they share its spirit: 1597cc, four cylinders, 115bhp and 100lb ft (for the original 1.6), five speeds, rear-wheel drive, double wishbones at all four corners, 185-section tyres and 971kg at the kerb. 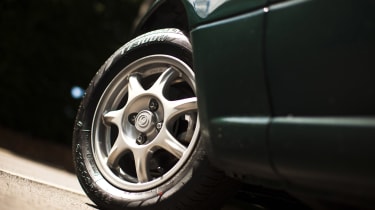 The numbers are modest, but Mazda’s ‘jinba ittai’ concept – ‘horse and rider as one’ – invite you to delve beyond simple performance statistics. Well, that’s the theory. Stretching along Goodwood’s pitlane is a line of MX‑5s, from early cars to the latest Mk4. We’ll be sampling generations one, two and three here, starting with the first.

Climbing into this later 1.8-litre-engined example reveals the first pleasant surprise: you’re actually sitting in a manner approximating that of a sports car. Early MX-5s aren’t known for their low-slung seating position, but the soft fabric allows me to sink lower than the firm leather of my own Fast Fleet Eunos. The extra friction should reduce the bracing required in faster corners, too.

Less pleasant is the three-spoke steering wheel – there’s little wrong with the shape or the thinness of the rim, but the textured, injection-moulded affair is a reminder of the bad old days before even the most basic supermini featured a cow-skinned wheel. Earlier Mk1s used a neat Momo number whose padded horn press could be removed to expose the racy metal spokes beneath.

Sadly, the tyres are flat. Or they seem to be. A twist of the wheel to extract the Mk1 from its place in the string unearths another facet of this particular car – there’s no power steering. This kept the price low back in the mid 1990s – an unadorned 1.8 could leave the forecourt for £14,495, against the £17,595 of a better-specified (and power-assisted) 1.8iS.