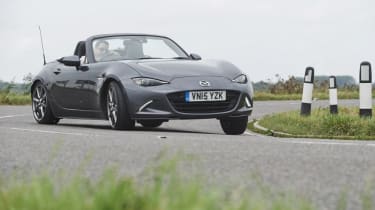 Mazda MX-5 ambassador Nobuhiro Yamamoto has told evo that there is an appetite within the company for a more focused take on the MX-5 sports car.

Yamamoto, who has worked with Mazda since 1973 and was involved with development of the 787B Le Mans, has long been instrumental in the MX-5 programme. Credentials such as those confirm him as a bona-fide petrolhead, and he recognises that there is scope for the current MX-5 to appeal to devoted driving enthusiasts more than it currently does.

The new MX-5 RF offers a slightly more refined experience than previous MX-5s, and as a result there is a gap in the MX-5 range to be filled by a more hardcore sports car.

However, there are no plans to expand the range beyond the two existing body styles, the Roadster and the RF. Sadly, that means we’re unlikely to see much variation from the current cars, and the Speedster and Spyder concepts shown at SEMA in 2015 will remain just show cars. 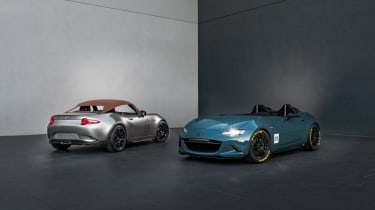 Yamamoto was also clear that the MX-5 was, at its heart, an open top car and as such a coupe version is not on the cards. Instead the Roadster and the RF will form the basis for special editions that will satisfy keener drivers.

The MX-5’s history is full of limited edition versions, most of which are just painted special colours, fitted with different wheels or have more luxurious interior trim.

Some however had more than simply superficial changes; the Mk1 Le Mans edition, painted in the 787B’s orange and green livery, was fitted with Tokico suspension, OZ wheels and was turbocharged by UK outfit BBR but sold through Mazda dealers.

The MX-5 GT, based on the soft-top Mk3, also received many mechanical changes. It was given 45bhp more power increasing the output to 203bhp, Bilstein adjustable coil-overs, Recaro seats and a central exit exhaust. The GT was built by British Le Mans race team Jota, but just like the Mk1 Le Mans, was fully sanctioned by Mazda. 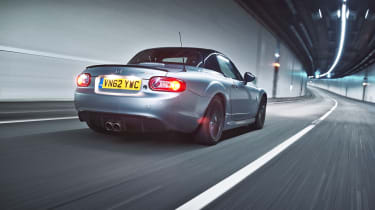 For any future special editions to really appeal to driving enthusiasts and begin to improve some of the areas of the current MX-5 that we’ve been critical of, the changes will need to be as thorough as those made to the Le Mans edition and the GT.