Does the McLaren 720S have the measure of the mighty P1 hypercar? 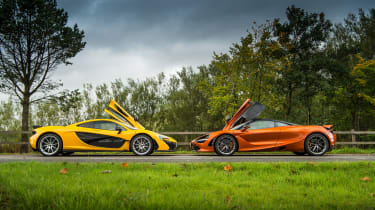 I still haven't got used to the raw fury of the McLaren  720S fully winrg-out. I’m not sure I ever will, I;m not sure I ever want to, and I’m not afraid to admit it. Experiencing 8000rpm within the confines of hedges, trees and ditches still evokes a mix of breathless exhilaration, suppressed fear, and a cringing sense of social irresponsibility. In fact, anyone who says they’ve strung together a proper road while dipping regularly into the final 2000rpm on the rev-counter is either some conduit for the spirit of Ronnie Peterson or telling some really big fibs. As you will have gathered if you’ve read the preceding pages, the 720S’s ultimate performance redefines ferocious at anything sub-hypercar level, perhaps even beyond.

It may also have occurred to you that the 720S offers the kind of fireworks that would give the mighty P1, McLaren Automotive’s first Ultimate Series car and spiritual successor to the legendary F1, a very hard time. Indeed, its lap time at Anglesey proves that, in certain situations, it’s faster.

Shorn of the P1’s hybrid system’s weight penalty and with the benefit of five years’ further car-making experience, the conventionally powered 720S threatens to make the P1 seem over-complicated and over-the-hill. Is this a case of early adopters paying handsomely (£866,000 in the case of the P1) for the futuristic tech, only to see those who waited longer getting similar performance for a quarter of the money? I’ll admit, that was what I thought – before McLaren offered the chance to drive a P1.

What is it about the P1’s demeanour, I wonder, that has the ability to command everything in its orbit? I think it might be the relationship between the turret-like occupant pod and bodywork so pared-back that it’s almost non-existent: less recognisably car, more alien inter-galactic craft. The 720S metaphorically shrivels ever-so-slightly, slipping into the background in suitable deference to its illustrious father.

After the soft-touch thunk of the 720’s door closing, the crack as I slam the P1’s door overly hard makes me wince. Once inside it’s recognisably McLaren, but there’s a lot less trimming and much more structural carbonfibre on show. There’s nothing like the 720’s rearward vision, either, but in an odd sort of way I don’t mind that: I don’t want my £2m-plus (at current market values) hypercar experience to be too friendly, too easy, too accessible.

The P1’s V8 may be smaller than the fundamentally similar engine in the 720S, but it has more power (727bhp to 710bhp) and it is, of course, further boosted by its 176bhp electric motor. At its peak that makes 903bhp, a figure so massive that I’m not sure I can begin to imagine what it might feel like.

You can tell a lot about a car in the first 50 metres, and the P1 feels firm but poised, reassuringly rigid but also unfiltered in refinement terms – every bit of gravel on the road can be heard and felt, but not in an uncomfortable way. And it is patently very, very angry.

To be honest, I had a preconception about the P1. I knew it would be fast and clever but, as with other hypercars, I always questioned its relevance beyond introducing new technology. Surely its limits were just ludicrously high for the public road. Frankly, what was the point?

I was wrong though, very wrong, because the P1 is by several degrees of magnitude more exciting than the 720S. Indeed, it is one of the most exciting cars I’ve ever driven, period. Furthermore, this isn’t an experience defined by raw speed. There’s a purity to the way the P1 handles and feels – the way it pivots beneath you, the lack of slack absolutely anywhere in its make-up, its nimbleness in spite of its weight. Ludicrous expressions like ‘an Elise with a nuclear reactor on board’ spring to mind. It’s the sort of car you’d take out just to pop to the shops to buy milk. I never expected that. 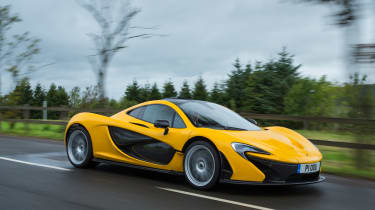 But the really special thing about the P1 is its combination of almost incomprehensible power, freakishly immediate throttle response due to the electric torque-fill, and the colossal wheeze of the giant turbochargers. In fact, the only thing louder than the P1’s turbos is the sound of my hysterical laughter every time they huff. Embarrassing but true.

Jumping back into the 720S afterwards feels, rather absurdly, like an anti-climax. I must have driven over 2000 miles now in McLaren’s latest supercar and I happen to think the car is a genuine triumph, but, be in no doubt, it’s no cut- price P1. Not by a long shot.