The McLaren P1 supercar has been revealed in production form at the Geneva motor show. Live show pics and evo video here 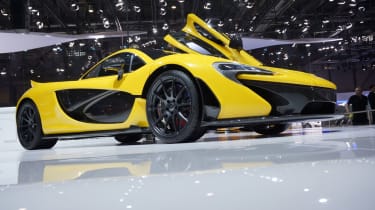 McLaren has revealed the long-awaited P1 hypercar at the Geneva motor show. It appears at the same time as the closely-matched Ferrari LaFerrari, the Enzo replacement and main rival.  The British sports car maker last week confirmed the P1’s hybrid powerplant, mating a mid-mounted twin-turbo 3.8-litre V8 engine to an electric motor for a combined total of 903bhp, a healthy 276bhp more than its spiritual predecessor, the McLaren F1. And while it’s set to weigh comfortably more, (unconfirmed reports suggest 1400kg, over 20 per cent higher than the F1’s 1137kg), its performance figures embarrass the former fastest car in the world.

The P1 hits 62mph in less than 3sec, 124mph in under 7sec and 186mph (or 300kph) in less than 17sec. That makes it five seconds quicker than the F1, McLaren keen to brag of a 23 per cent improvement on this supercar-only speed increment. The F1 gets the upper hand when it comes to top speed, though; the car famously hit 243mph back in 1998, while this new P1 is electronically limited to 217mph, putting it behind claims for the Aston Martin One-77 and Noble M600, its fellow British supercar competitors. McLaren has been keen to shout about the P1’s aerodynamics and drivers’ car potentials, though, and boasts of its everyday driveability, something we found the Aston a little too savage for. The interior is very driver focused, and is dripping in carbonfibre, not least from its ‘monocell’ chassis tub that first debuted on the McLaren MP4-12C. It measures 83mm longer and 37mm wider than the 12C, but is 29mm lower. The McLaren P1 remains as striking as its 2012 Paris motor show concept, with a set of bespoke Pirelli P Zero tyres, a set of Akebono carbon ceramic brakes (apparently also used in space travel – obviously) and the addition of some extra cooling ducts ahead of the front wheels. Priced at £866,000 – equivalent to a Pagani Huayra while much less than an Aston One-77 or Bugatti Veyron – the new McLaren P1 will be limited to 375 units, all of them set to be left-hand drive.