evo talks to Mercedes-Benz aerodynamicist Dr. Teddy Woll about the unique extending shape, and how it aids aerodynamics 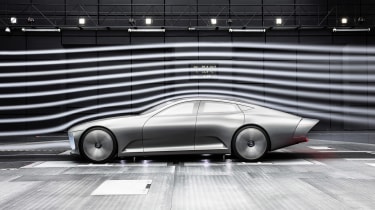 We’ve declined to bring you news, dear readers, of the latest Toyota Prius. But if proof were needed that aerodynamics need not necessarily require the Toyota's challenging styling (you'll have to Google it, and don't say we didn't warn you), Mercedes’ latest concept is that proof.

Named Concept IAA – for ‘Intelligent Aerodynamic Automobile’, rather than the eponymous official title of the Frankfurt show – the car is a sleek teardrop-shaped saloon with a drag coefficient of only 0.19.

For comparison, that figure is little more than the 0.186 of Volkswagen’s ultra-frugal XL1 eco car, and better even than the 0.22 Cd of the slipperiest Mercedes-Benz CLA - something Mercedes aerodynamicist, Dr. Teddy Woll, tells evo is near the limit of what's possible for a standard production car.

To push it under the 0.2 Cd barrier, Mercedes has had to resort to extremes, within the stylists' requirements that the body be 'sporty' and 'muscular'. The company also had to do it with a wide rear track - quite significantly different from cars like the XL1, which taper over a narrow rear track.

Dr. Woll described the concept's key points to evo. 'In total we have five measures on the car – a [cooling system] shutter at the front, a retractable front lip, front flaps that move out and backward to direct the air flow around the front wheels, the wheels – which have a stylish [dished] design, but at higher speed via centrifugal force they close [go flat] – and the rear, which extends by 390mm.' 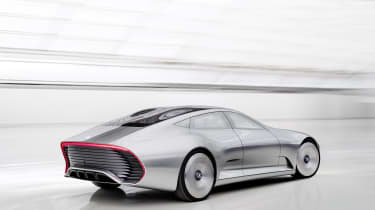 Smooth and sleek as standard, the extending rear lengthens the car from 5040mm to 5430mm, aerodynamically optimising the shape in the process. The longer airflow remains attached to the surface of the car, the less time it spends creating drag-increasing turbulence.

'If you push a car through the air you create low pressure behind it, which pulls the car backwards,' Dr Woll tells us. 'This is the main source of drag in cars.'

'If you make the tail smaller, you lose a lot of drag. If you look at fish or birds, or any animal that has to swim or fly fast with low energy, all have this drop-shape, boat-tailing rear. In this form, the rear end design could be implemented on a road car.'

In all, Dr. Woll tells evo there's a 'good chance' that the extending rear and innovative wheel design could appear on road cars in the future - helping Mercedes dip below that 0.2 drag coefficient barrier.

Elsewhere, styling is similar to that of the F 015 concept presented at the Detroit auto show earlier this year, albeit further refined and more elegant. Mercedes describes the front end styling as shark-nosed, while the rear – when the segments are stowed – has echoes of the slatted front grille. Front lights flank these slats, while a ring of light further defines the unusual tail. 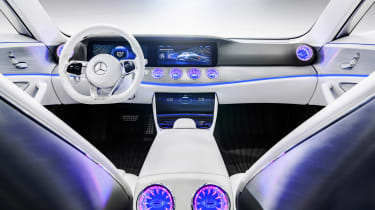 The interior is equally modern in appearance, though its basic forms aren’t dissimilar from those of the production S-class range. Much of the cabin is trimmed in beautifully stylish but ultimately impractical white leather, with details picked out in anthracite, aluminium and cut glass.

Touch-based functions are a major feature of the cabin, both on the elegant centre console and the two-spoke steering wheel – again a development of that in Mercedes’ flagship. Optical Finger Navigation buttons replicate the functions of traditional physical buttons but make for a simpler appearance, and OFN buttons on either side of the wheel correspond to instrument cluster menus on their respective sides – reducing the need for drivers to hunt for the screen function they’re changing.

Motive power is almost secondary to aerodynamics in such a concept, but Mercedes says its power source as a petrol-electric plug-in hybrid, with a modest 275bhp at its disposal.

The car’s electric range varies according to its aerodynamic profile, but extended it can drive 2.5 miles further, at 41 miles to the 38.5 miles in ‘design mode’. CO2 is 28g/km at its most aerodynamic – though Mercedes notes that the NEDC economy cycle’s weighting towards slower motion doesn’t accurately represent the bodywork’s benefits, which come into their own at higher speeds.

We'll bring you more images of the striking Concept IAA from the show itself. In the meantime, keep up to date with other Frankfurt launches at our motor show hub page.