One of the industry's many tilting car concepts, but one whose technology lives in spirit today 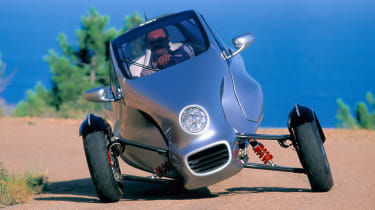 1997 was not a vintage year for Mercedes-Benz, being the year the first-generation A-class hit the road. And then floated above the road, and then hit the road again as a pair of journalists from Swedish car magazine Teknikens Värld turned the car onto its roof during their standard accident avoidance manoeuvre, dubbed the ‘elk test’.

The A-class was actually a jolly clever car, with a sandwich floor down which the engine would be pushed in an accident, and packing E-class interior space into a footprint shorter than a Fiesta.

But der Elch Vorfall gave Merc’s reputation a kicking (at a time when quality was already slipping) and required significant extra investment to make the supermini a little more stable.

Ironically, 1997 was also the year Mercedes unveiled a concept that wouldn’t fall over even if you tried. Or at least, fall over in the direction you expected. It even featured an A-class engine.

The F300 Life Jet was one of the automotive industry’s occasional forays into leaning cars and featured the same marketing spiel: a car with the driving experience of a motorcycle, they said.

Quite a hefty motorcycle, given the Life Jet weighed around 800kg, and one that broadly look up the same road space as a regular car. More than a standard A-class, in fact. 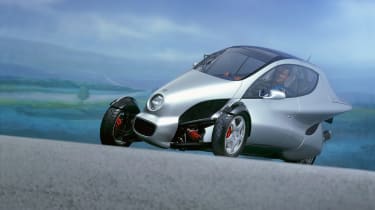 Look at the F300 in isolated pictures and you expect some sort of Twizy-sized three-wheeled pod, but those five-spoke alloys are each 16 inches in diameter at the front rather than the diddy 13-inchers you expect, and the tandem passengers sit high in the chassis. A compact, Carver One-style sportster the F300 was not.

A system called Active Tilt Control could tip the F300 up to 30 degrees in the direction of a given corner (preferable to the 180 degrees or so a pre-ESP A-class could achieve in extremis), detecting steering angle input - the Life Jet had conventional, car-like controls - and activating hydraulics to roll the body into the corner.

It could apparently achieve 0.9g of cornering force, and due to the tilting body this force would be exerted more comfortably on the occupants, pressing them into the seats rather than trying to slide them out.

The 1.6-litre, 101bhp four-cylinder A-class engine failed to turn the hatchback into a hotter one, but in the lighter, more aerodynamic F300 it was apparently good for a 7.7-second 0-62mph time and 131mph. Its 53mpg economy seems less impressive today, but in 1997 that was a significant improvement on the A160’s 36mpg average.

Unsurprisingly, the F300 remained a concept, and all Mercedes today include at least four wheels under their chassis (some offer a couple more).

The concept of the leaning car though is alive and well, as part of the firm’s Active Body Control system and its ‘curve tilting’ function. By dropping the inside suspension slightly in corners the body remains flat and the passengers remain unruffled. Good for cornering, good for comfort, and one imagines, good for avoiding roaming ruminants.