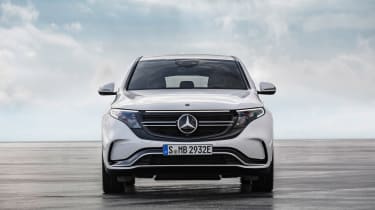 You could be forgiven for thinking that the onward march of electrification might sound the death-knell for manufacturer’s performance arms but according to Mercedes nothing could be further from the truth. “I can see a pairing between EQ and AMG,” said Ola Kallenius, Mercedes board member for research and development and future CEO, when talking to evo at the Paris motor show.

The first of Mercedes’ electric EQ models, the EQC SUV – set to rival the Tesla Model X and Jaguar I-Pace – will be joined by a raft of fully electric EQ models in the near future with an EQA hatchback and an EQS flagship saloon already in the pipeline.

An AMG model based on the EQC is expected to continue to utilise the 80kWh battery pack but this will be linked to higher output electric motors that will prioritise performance to the detriment of the vehicle’s range. Expect a significant power hike over the standard model’s 402bhp.

In the more immediate future Mercedes-AMG’s first push into the electrified end of the market will be with a plug-in hybrid. The new technology is dubbed EQ Power Plus and, according to Kallenius, the powertrain is akin to a “KERS system for performance cars,” and is believed to be a combination of the 4-litre AMG V8 and a powerful electric motor. Expect a production car debut in 2020.