The GT3-derived Mercedes-AMG GT Black Series is now officially the world’s fastest series production road car around the Nürburgring Nordschleife, lapping it in 6:43.616 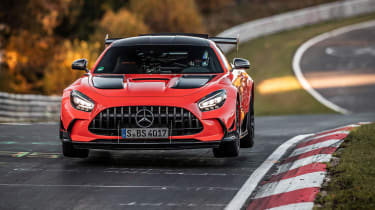 Over two years have past since we last saw a new production road car Nürburgring lap record, but Mercedes has done just that with the new AMG GT Black Series lapping the Nordschleife in a blistering time of 6:43.616 with GT3 driver Maro Engel at the helm. The lap time beat out the Lamborghini Aventador SVJ’s previous production car record time of 6:44.97.

While there is no official standings to govern these lap record results, the Manthey-Racing fettled Porsche 911 GT2 RS MR’s 6:40.3 time also set in 2018 was colloquially denied thanks to its third-party upgrades, as such keeping it from entering the series production road car leaderboard. The Aventador SVJ, then, was the car to beat, and the GT Black Series did so with 1.35 seconds to spare.

Unlike some previous record-holders, Mercedes-AMG claims that this particular GT Black Series had a completely standard setup, from the safety equipment to the aerodynamic configuration and, of course, tyres. Being the brand’s most extreme road-legal model, the factory GT Black Series does have the ability to be finely tuned in its setup depending on use, which in this case was the record attempt.

To do the job, its adjustable front splitter was extended to ‘Race’, while the rear spoiler was set to the middle position for a balance between ultimate downforce and not creating too much drag on the Nordschleife’s high-speed sections. The suspension was also dropped by 5mm at the front and 3mm at the rear, and the front and rear camber was set to the maximum possible negative values maximising lateral grip, with the adjustable anti-roll bars also switched the hardest setting. 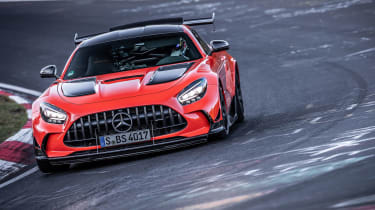 Maro Engel was said to have switched between different levels of traction control via the dash-mounted control depending on the track section, using the systems to capitalise on the performance from the ultra-soft Michelin Pilot Sport Cup 2 R MO tyres designed specifically for the GT Black Series.

The AMG GT Black Series’s 4-litre twin-turbocharged flat-plane V8 was as per production, and in producing 720bhp and 590lb ft of torque is in fact substantially more powerful than Maro’s own GT3 racer. Power is sent to the rear alone through a seven-speed dual-clutch transmission, helping it along to a 3.2sec 0-62mph time and 202mph top speed.

The record time follows shortly behind the four-door AMG GT 63’s own success at the ‘Ring, claiming the title of world’s fastest ‘executive-class luxury car’ with a time of 7:27.80 last week.