It seems unlikely that AMG will ever build another naturally aspirated V8, so fill your boots while you can. 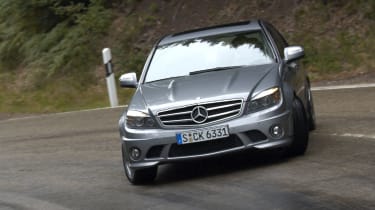 We've lived through the era of the small sports saloon with a big, naturally aspirated V8 motor, and are now comfortably into the age of turbos and downsizing. But before all of this took place, you could guarantee that Mercedes’ offering would dwarf all others in terms of cylinder count and displacement.

It all started officially with the W202-based C43 AMG in 1997. A replacement for the straight-six-powered C36, the ‘43’ debuted the classic M113 V8 engine in 302bhp form. This was hooked up to a five-speed torque-converter transmission, so while there were chassis changes and a subtle bodykit, AMG maintained its position by providing a more mature, comfortable offering, albeit with a tyre-shredding wild side.

After the advent of the W203-generation C-class, by 2004 there was a new AMG powerhouse: the C55, using an un-blown version of the 5.4-litre V8 (also an M113) that in supercharged form powered the E55 and SL55, among others. With 361bhp, the C55 comfortably out-muscled BMW’s E46 M3 of the same period, but the usual fi ve-speed auto and less focused chassis made it quite a different car. It was also now avaible as an estate.

In 2011 the C63 appeared, and this time AMG met its rivals head-on, introducing the extraordinary M156 V8 – the fi rst V8 it had designed from scratch. With 6208cc and 451bhp (or 480bhp in Performance Pack versions), not to mention a far sharper chassis, the C63 will be remembered in future as a classic ‘small’ muscle-saloon.

‘C43s are rising slowly in value at the moment. Some classic dealers are trying to get crazy prices, but the majority of those are on sale-or-return. A few years ago they were £2000-3000, but higher-mileage ones are £5000 now and good cars can be £10,000-15,000. They do suffer from corrosion – this was Mercedes’ bad era. I think the C55 is far superior, though, and prices are in the same bracket: they’ve nearly done their depreciation. The C63 is dropping like a stone at the moment. They’re more expensive to run than a C55, especially the brakes from Mercedes.’

‘Rust is the main issue with C43s, so check underneath for corrosion. Prices for the C55 seem to be stagnant, with good cars from £10,000. Really good estate versions can be £15,000 – the wagon is rare and worth more. C55s are really reliable, but do suffer a bit from the same rust issues as the C43. The C63 tends to start from £20,000 now, but they will drop. There are a couple of engine issues – snapped head bolts and noisy start-up from cold – but they’re easily fixed. Lots have been crashed, so check them out carefully. And be prepared for some big bills.’ 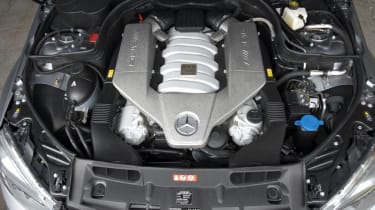 ‘I’ve owned a C43 in the past and currently have a C63 wagon, but I’ve also driven quite a few C55s [Terry runs Wayne Gates Mercedes-Benz Servicing – visit mercservicing.co.uk]. They are completely different cars in every way. A good C43 is now an appreciating asset, but if I were to advise on what to look for I’d have to brainstorm on about four pages of A4! The biggest enemy is rust, and the gearbox broke on mine, too – and it cannot be repaired, only replaced. And it’s unique to the C43. I actually preferred my old C36 to the C43; in some ways it felt faster and it was also the last of the real AMGs. Look also for rust around the jacking points on C43s. The brakes used to be expensive, but needn’t be now.

‘My C63 has the limited-slip diff, even though it’s not a Performance Pack car – that’s really important to have, although some fit aftermarket diffs if they haven’t got a factory item. I use my car daily, and apart from a small fuel tank and the fact that it’s a bit small inside for a wagon, I love it. I’ve toyed with the idea of an E63 biturbo, but I know it wouldn’t make me smile as much as the C63. And anyway, Mercedes isn’t going to make another big naturally aspirated engine.’