Mercedes-AMG C63 Coupé review - will this be an M4 beater?

Make no mistake, this is a hardcore, high-tech machine 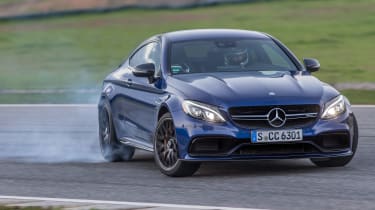 Earlier this year we enjoyed seeing the battle play out between the C63 saloon and BMW’s M3. In the end the BMW just nicked it by a whisker - at least so far as we were concerned - but the fight slugfest always going to continue when AMG launched the C63 Coupé. We’ll have to wait until early next year for our chance to compare it with the M4, but this first drive in southern Spain will tell us whether AMG has really come out fighting.

As ever with an AMG, it's the motor that is the star of the show, in this case it's the mighty 4.0-litre biturbo V8. Yes, we mourned the passing of it’s naturally-aspirated predecessor, but in all honesty it’s impossible not to fall for this engine, especially in S tune with headline outputs of 510bhp and 700Nm of torque (up 34bhp and 50Nm on the regular C63), not to mention a comfortable sub-4.0sec 0-62mph time and a top speed of 290kmh when you go for the AMG Driver’s Package.

From the moment you start the C63 Coupe you’re hooked on its soundtrack, urgency and raw energy. Few cars of this type stimulate your adrenal gland so immediately, but that’s the AMG way. As is Speedshift MCT transmission. Strictly speak it’s not a conventional torque converter auto, but it’s closely related to one, which accounts for its smoothness and the character of its shifts compared to a double-clutch gearbox. It’s quicker-witted than it used to be and feels great when driven in fully automatic mode. Shift gears yourself and you don’t have the frustration of the fractional delay that used to get in the way of enthusiastic driving, but it still doesn’t quite have the lightness of touch you get from the best DCT or PDK ‘boxes. 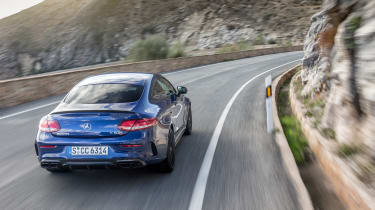 >Read our review of the C63 Saloon here

To be honest, such is the torque on-tap from low revs there’s little need to flex your fingertips and work the aluminium paddles. It’s huge fun to simply point and shoot the C63 out of corners, letting the transmission do its thing and feel the epic, endless rush of the biturbo V8 as it hits the meat of its mid-range. Work it harder and there’s plenty left at the top-end, too. In fact it leaves you feeling slightly giddy. Addictive only begins to describe the manner of this car’s performance.

It certainly looks ready to rumble. Apart from the roof, doors and boot lid, the Coupé’s skin is all-new and, it has to be said, spectacularly muscular. Extravagantly flared wheel arches (64mm wider at the front, 66mm at the rear) transform its stance and presence from that of a rather svelte and elegant small coupe into a real thug. A few years ago AMG could have stuck a Black Series badge on the tail, it’s that pumped and aggressive.

Things are just as serious beneath the bodywork. Most obvious are the wider wheels and tyres (255 section fronts, 285 rears), but there’s significant structural reinforcement to better contain the lateral and longitudinal forces generated during maximum cornering, braking and acceleration. AMG has also gone to town on the suspension, most notably the  rear, which features an all-new multi-link axle, which combines a wider track with greater wheel control and negative camber. 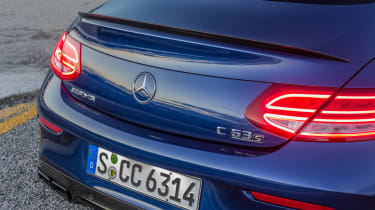 The front-end also boasts a wider track, plus bespoke steering knuckles, and all four corners are controlled by AMG 3-stage adaptive dampers. Both the C63 (£61,160) and C 63 S (£68,070) models feature a limited-slip differential as standard, the former running a regular mechanical diff, the latter using an electronically controlled version. The S also has dynamic engine mounts and bigger brakes (390mm front, up from 360mm) as standard. Even bigger 402mm ceramic front discs are available as an option. Make no mistake, this is a hardcore, high-tech machine.

>Read our review of the BMW M4 here

Like the C63 saloon, the Coupe is a fine place to be, its interior looking and feeling premium, with plenty of brightwork and detailing to lift it above the equivalent M car. Optional sports seats add some attitude - and support - without compromising comfort, which makes a change in an age where sports seats can often be excruciatingly uncomfortable.

Despite flying two-and-a-half hours south, to the Costa del Sol, we’re greeted by decidedly British weather. It’s a great shame, for the roads - particularly the one that winds through the mountains from Marbella to Ronda - are terrific. There were fleeting moments when we enjoyed drying tarmac, but unfortunately the weather got even worse at the Ascari Race Resort.

Sodden conditions are not the best in which to unleash a 510bhp coupe, but they do prove you can put your faith in the assorted stability systems. I’m old enough to remember the days when planting your right foot in an AMG product on a wet road (or a dry one, come to that!) would so completely spook the traction control that the car would barely move. It’s fair to say the C63 Coupe remains traction-limited, but the ESP is so well-judged you can make extremely rapid (and safe) progress, and have fun at the same time. 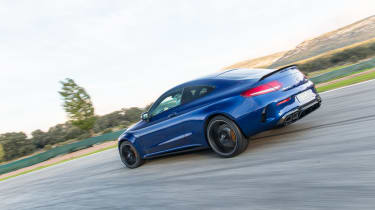 So, the weather put paid to any definitive assessment of the new C63 Coupe, but there’s still plenty to take from the launch. Firstly, that this is a hugely desirable car, both in looks and character, where it trumps the M4 just as surely as the C 63 Coupe edged the M3.

Damping-wise it remains a firm car, even in the most compliant setting. Like the saloon it could be too firm to be entirely at ease on UK roads, but AMG say they’ve tweaked the damper settings, so there’s hope that vertical fidget will be better controlled. The Coupe’s all-new rear axle brings more precision and the wider track improves the steering response and a sense that there’s more outright grip to lean on, though we need warm, dry roads to discover just how much.

What we can say is the C63 Coupe is an immensely potent package, made all the more complete by looks and attitude that embody the very best of AMG’s increasingly extreme ethos. If the many hardware changes between it and the C63 saloon yield the promised results this could be the sweet revenge AMG is looking to exact on BMW’s M Division.