The best estate car in the world. Has the new Mercedes E350 CDI done enough to earn the title? 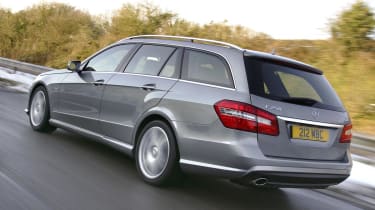 A new version of what’s long been regarded as the World’s Best Estate Car, the Mercedes E-Class estate. Although we’ve already driven the E500, the engine of choice isn’t the V8 petrol, but the V6 E350 CDI diesel, prices for which start at £38,045.

In a car like this the technical highlights have nothing to do with the engine or suspension, but the amount of space inside and how easy it is to use. 695 litres of boot space may not mean much, but take it from us, when an Audi A6 Avant has 565 litres and even a Volvo V70 musters only 575 litres, that’s loads. Especially when you fold the seats and that figure rises to 1950 litres. Except that you don’t fold the seats: pull a lever just inside the rear doors and the seat backs stow themselves. Very neat. Just like the host of other useful features. In short it’s a cleverly conceived and brilliantly space efficient car.

I couldn’t stand it to start with. It wasn’t that it was particularly remote and lacked any form of pizzazz – I’d expected that – instead it was all the nanny-ish warnings. Lane Keep Assist that vibrates if you stray over a white line, radar cruise to keep you well away from the car in front, Attention Assist that tells you to take a break and, worst of all, Pre-Safe Brake that slams the anchors on all by itself. That one nearly caused an accident at a roundabout on the A43. Luckily nearly all of them can be (and were) disabled from then on…

So the actual driving. Pilot it by yourself on a B-road and you won’t have a blast. The diesel’s a touch coarse at the top end, the relaxed suspension ain’t that sharp and the car just feels a bit unsure of itself. But do what I did, load up with family, bikes, roof-box and kit for a few days in Devon (there’s a pic in the gallery) and its purpose, its role becomes crystal clear.

The ride is perfectly cushioned, no noise is permitted into the cabin, there’s stowage for sweets, maps and phones and above all there’s a sense of relaxation, of the car being at one with itself, as happy hauling kids and clobber as a 911 GT3 RS is at the Nurburgring. It even cleans up easily after a week at the beach.

It’s really hard to know how to rate it as a result. From a traditional Evo standpoint it’s a three, maybe three-and-a-half star car, but factoring in the family adds at least one more star. I’ll hedge my bets and go for four.

It’s the ultimate estate car – at least until the new 5-Series Touring turns up, and on past experience I’d favour the Merc to edge that contest. Of the two already mentioned, the A6 is cheaper, but long in the tooth, and the Volvo doesn’t quite have the broad repertoire of the E-Class. However, there is one family car that could challenge the Merc’s supremacy: the Land Rover Discovery 4. A purpose built seven seater that’s arguably even better thought out inside, and exudes an air of imperious impregnability. For pace and economy the E-Class has it licked, though.

Chris Harris has just bought an E250 CDI as his family wagon and it might well be the best choice in the range. The E350 CDI I drove uses the same 3.0-litre unit as the outgoing E320 CDI, and with all the clobber on board only managed 26.5mpg. The figures suggest the new twin turbo 250 should better that by 10mpg while only being 0.6secs slower to 60mph.