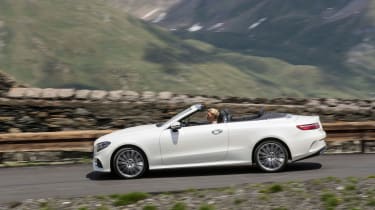 Does a big elegant four-seater cabriolet like the new Mercedes-Benz E-class Cabriolet even need to work away from somewhere like the Riviera? You’d expect to find it plodding down coastal roads at a pace that allows the occupants to soak up some sun and enjoy the lovely views rather than blasting up mountain passes, but as the drop-top E-class isn’t physically restricted to posh coastal areas we needed to find out.

Based on Mercedes’ new E-class Coupe, the Cabriolet gets the same range of three engines; a 191bhp four-cylinder diesel, a 242bhp inline-four petrol, a 252bhp V6 diesel and, the car we tested, a 328bhp 3-litre V6. It also shares the basic interior architecture as the coupe.

> Read our review of the Mercedes-Benz E-class Coupe

Other than the huge folding canvas roof, the equipment that separates the drop-top from the coupe is Merc’s Air Scarf, a vent in the back of the seat that blows warm air around your neck and Air Cap, a spoiler that raises from the upper windscreen frame to reduce buffeting when the roof is down.

The E-class coupe gets a host of driver assistant systems to help you stay supremely relaxed as you cruise along. The very clever lane keep assist and radar guided cruise control are some of the very best we’ve tried on motorways and main roads. They keep you firmly in your lane rather than making the car meander as they bounce it from one white line to the other. They also allow you to remove your hands from the wheel, should you really want to, for a very long period before warning you to interact with the car again. The systems are so good you do have the confidence to let the car take control rather than interfering. 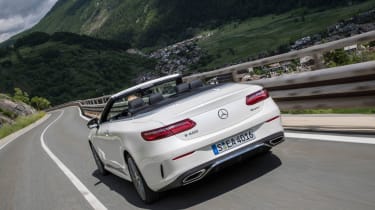 In towns and cities, where white lines cross the carriageway quite often or you need to move out of your lane to create space for other cars, the safety systems seem a little bit over zealous, overriding the brakes and steering gently but too often. Thankfully, with just a few buttons on the dash – rather than having to delve unto layers of the infotainment system – you can disable the safety systems quickly and easily.

> Find out what the Mercedes-AMG E43 is like to drive

The entire E-class Convertible range gets Merc’s nine-speed automatic gearbox, while the E400 gets four-wheel drive with a fixed 31:69 front to rear torque split. This helps the E400 accelerate from 0-62mph in 5.5sec and go onto an electronically limited top speed of 155mph.

There’s nothing particularly sporty looking about the E-class Convertible so it doesn’t promise the most thrilling or exciting driving experience. Instead, its smooth and rounded lines make it look long and graceful – especially with the roof down. Despite a few shiny trinkets, the chromed hexagons that are nestled in the front grille for example, it still looks classy.

The interior is equally as sophisticated thanks to deep sumptuous seats, elaborately finished speakers aluminium switches and a welcome lack of carbonfibre trim. The expanse of wide screens that stretch from the driver’s side then across the centre section of the dash add a high-tech feel to the inside. 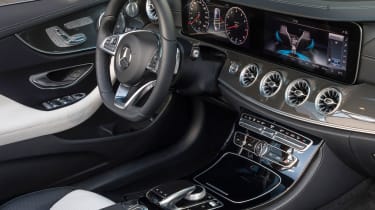 The engine is very quiet. Even with the roof down, when there’s nothing to shield your ears from the exhaust note, it’s hardly audible. Accelerate gently and the engine remains smooth and the gearbox switches between its many ratios so subtly you barely notice.

Cruising along, the ride is exceptionally refined. Over smooth European tarmac you can detect a slight wobble, but it’s so subtle that it’s hard to identify whether it comes from the optional air suspension or the lack of roof. For the most part, though, it’s supremely relaxing. Our unkempt UK roads might exaggerate this slight shake, but we doubt they’ll ruin the way the car rides completely.

The air cap device that attempts to reduce buffeting with the roof down may very well look awkward – it looks like the bodywork above the windscreen is hovering two inches too high and a screen rises behind the passenger compartment ruining the long lines of the body – but it works. Even at motorway speeds, when most convertibles are frankly unpleasant with the roof down, the E400 is quiet and you can easily conduct a conversation with your passengers without raising your voice.

Attempt some eager manoeuvres, try to leap in front of another car or overtake, and none of the urgency that modern turbocharged engines deliver, the sort of performance we’ve become used to, is apparent. The engine’s lack of enthusiasm, even if you wind up the driving mode to Sport+, makes the E400 feel heavy. When you are in the more aggressive engine mode you do hear a pleasant raspy note from the exhaust at the top of the rev range; nothing outrageous or over the top, but a kind reminder you’ve got more than a mediocre diesel engine under the bonnet.

Tip the car into a corner with any sort of verve and a little creak from the interior serves to remind you that this is no sports car. Rather than flop around, rolling excessively with the body twisting unpleasantly though, the E-class simply turns in with a remarkable lack of drama. 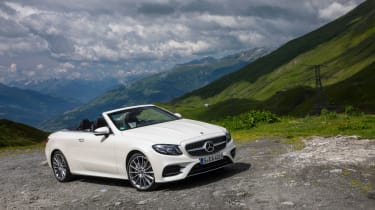 The engine means you don’t ever build up huge amounts of speed, and it certainly doesn’t give you the ability to influence the car’s angle with the throttle, but there’s such an excessive amount of grip there isn’t really any need to adjust your trajectory.

Although the E400 is far from the fastest or most engaging car, you can’t help but be impressed by its tenacity to stick to the road and its unyielding composure and it drives with the same sophistication as its looks suggest. It wouldn’t be your first choice to climb some of the more tortuous alpine passes, but you wouldn’t have to avoid them either.

The E400 costs £55,715, while the entire E-class Cabriolet range starts from £44,675. The E400, however, comes with air suspension and the large infotainment screen as standard, a £1495 option on the less powerful models.

No one does four-seater cabriolets quite like Mercedes. As such, the E-class Convertible doesn’t have any direct rivals. Audi’s A5 Cabriolet and BMW’s 4-series Convertible are both smaller and nowhere near as luxurious. You can get versions that are just as fast as the E400 for a lot less than the Merc, if that’s your thing. For example BMW’s convertible 440i reaches 62mph in 5.4sec and costs £49,405, £6310 less than the Merc.

The Alpina B4 Convertible offers similar levels of comfort and refinement to the E400, yet it’s more entertaining down a B-road. However, at £62,950, it’s not cheap.

> ‘The Alpina is a very competent GT car. It covers ground quickly but does so without much fuss.’ Read our review of the Alpina B4 Bi-Turbo Convertible

Bentley’s aging Continental GT V8 Convertible might have a much more premium badge, a significantly heftier price tag (£154,400) and a more sumptuous engine, but the E400 is only 0.5sec slower to 62mph and runs it very close in terms of ultimate luxury.