Alpina B4 Bi-Turbo Convertible review – Better than an M4?

Does the Alpina feel significantly different to its BMW relative? 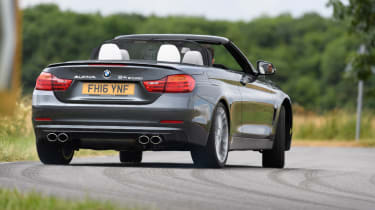 The Alpina B4 Bi-Turbo Convertible is a more dignified alternative to the BMW M4 Convertible; the interior feels much more plush with fancier leather, the dials are classier and it feels like it’s finished to a higher quality. What has been done to the Alpina might not be dramatic, but it elevates the B4 into a league above in terms of luxury.

The Alpina is packed with lots of extra goodies to separate it from the BMW alternative. There’s bespoke Michelin Pilot Super Sport tyres, 20” classic Alpina wheels and Brembo brakes.

The engine in the B4 Bi-Turbo is based on BMW’s straight-six N55 engine that appeared in the 435i, amongst others. However, the Alpina version has two turbo chargers rather than the N55’s single, twin-scroll turbo. It also has a 61% larger intercooler, a bespoke steel crank and an Akrapovic exhaust.

The engine itself has some real punch, but rather than being edgy and unpredictable it’s burly and smooth. The way the engine sounds matches its silky nature too with a typically refined, straight six exhaust note. However, if you select either the Sport or Sport+ driving mode, every time you change gear a flatulent burble is emitted from the back. The noise lasts too long and masks the pleasing exhaust tone, especially as the ratios in the eight-speed ‘box are so close that gear changes happen so frequently.

It isn’t just the interior that makes the whole persona of the Alpina feel more luxurious, the way the B4 rides is so sumptuous too. This is thanks to the entire suspension and the stability control having been recalibrated to work with Alpina’s signature wheels and the special Super Sports. When in Comfort you only feel the most aggressive road imperfections, you do hear smaller bumps but they’re rarely transmitted into the cabin. There’s not a significant amount of body roll in the Comfort setting, but the Alpina feels quite top heavy and takes a moment to fully right itself out of corner.

Sport and Sport+ stiffen the dampers, but although the ride is slightly compromised, the body roll is minimised and the whole car feels less top heavy.  More is asked of the body shell in the stiffer setting of the dampers and its lack of rigidity is more apparent, especially with the roof down.

In short fast corners the Alpina changes direction quickly and it has an incredible amount of traction. Despite the abundance of power, the tyres seem to grip unless pushed very hard. The steering doesn’t offer any real feel and the engine does feel heavy, and the Alpina can push into understeer without much warning. However, this is rare and only happens when driven hard. The rear tyres aren’t often overwhelmed either, but as you accelerate out of a corner the engine slowly builds momentum until the rear tyres can’t cope. Then, if the traction control is off, grip will bleed away in a progressive manner and the rear will begin to slide. It happens in such a slow and calm manner that it’s far from the spiky, intimidating car you’d expect from a 404bhp rear wheel drive car.

The Alpina is a very competent GT car. It covers ground quickly but does so without much fuss.

The cost for a standard B4 Bi Turbo Convertible is £62,950, that’s £1790 more than a BMW M4 Convertible. Although the Convertible is far from our favourite M4, it has a more extreme character than the Alpina with a far more aggressive drivetrain.

The Mercedes-AMG C63 Cabriolet is a better cruiser than the M4, although doesn’t ride quite as well as the Alpina. However, the C63 has an interior that’s juts as luxurious as the Alpina as well as a far more exciting drivetrain, is far more fun to drive and looks much more imposing. The Merc is £2753 more than the Alpina, but it has 469bhp. A whole 69bhp more.