The Mercedes-AMG GLC 63 and GLC 63 S will come in standard and Coupe forms with prices starting from £68,920 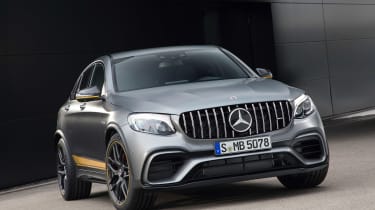 Mercedes-AMG has released official pricing for its upcoming GLC 63 – a hot-rod AMG version of its popular mid-sized SUV. Available in standard SUV and coupe-SUV body styles, the GLC 63 4Matic+, as it is officially known, will be reaching UK customers early next year priced between £68,920 and £93,291.

Like other ’63’ AMG models, the GLC can be had in two specifications, both utilising the AMG’s 4-litre M178 ‘hot vee’ bi-turbo V8 engine. As in the AMG C63 saloon and estate, the GLC 63 produces 469bhp, with the GLC 63 S building that figure to 503bhp. Both engines are connected to a 9-speed MCT Speedshift gearbox and Mercedes-AMG’s 4Matic+ all-wheel drive system.

Despite the similar 4Matic+ nomenclature to the AMG E 63 and its de-coupling front axle, Mercedes-AMG has confirmed that the GLC will not have this capability so will go without a drift-mode like in the larger E Class. 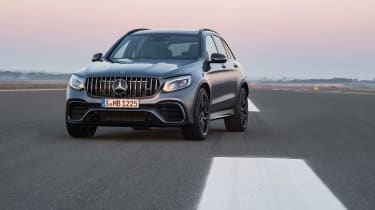 Mercedes-AMG has also released 0-62mph times, with the standard car reaching 62mph in 4 seconds, while the S drops this down to just 3.8 seconds, crazy figures for what are mid-sized family SUVs.

> Click here for our review of the Mercedes-AMG GLC 43

In true SUV style, the GLC benefits from four-wheel drive, but here it’s tuned to aid performance rather than off-road prowess. Fully variable torque distribution keeps the near two-tonne SUV on track in the corners, aided by a limited-slip differential on the rear axle. When the going gets less demanding, the GLC 63 reverts to rear-wheel drive. 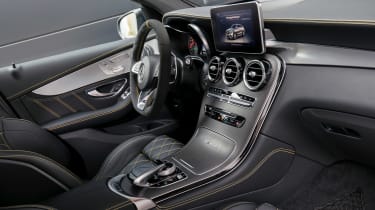 Further aiding grip is the GLC 63’s AMG-tuned air suspension. Individual control for each wheel minimises torque steer, Mercedes says, and enables higher lateral acceleration. The rear axle is inspired by the one on the E 63, and allows for a wider track and increased negative camber.

The air suspension itself is fully adjustable, with Comfort, Sport, and Sport Plus modes hopefully giving the GLC 63 the chops to serve dual purpose as a comfy cruiser as well as an AMG-tuned monster. A variable ratio for the electromechanical power steering allows for Comfort and Sport modes, too. The GLC 63 rides on 20-inch or 21-inch light-alloy wheels, and benefits from 360mm ventilated disc brakes front and rear. S models bump up the front brakes to 390mm ventilated discs. 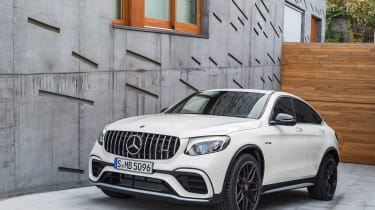 Of course, it wouldn’t be an AMG without a beefed-up styling package, and the GLC 63 doesn’t disappoint. The SUV is the first car other than the flagship GT to use the ‘Panamerica’ grille, which sits above a wide front apron and splitter supposedly inspired by a jet wing. There are wheelarch extensions (of course!) plus side sill panels to make the car appear lower. S models gain matt silver detailing on the front and rear splitters.

Inside, there’s lashings of ARTICO artificial leather – or fine nappa leather on S models – plus a liberal dose of AMG badging in the front head restraints and instrument cluster. A range of styling packages are available to personalise the car’s looks, though.