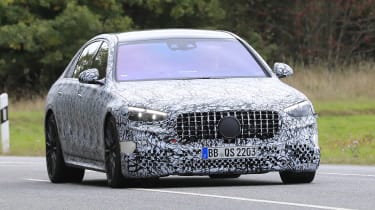 The Mercedes S-class has long been a technical spearhead of next-generation technology and design, and alongside everything the all-new S has to offer, the hot-rod AMG derivative should be packing some fresh hardware of its own.

As part of AMG’s path to complete electrification, this new S63 (if indeed it keeps that moniker) is expected to feature a plug-in hybrid powertrain combining AMG’s 4-litre twin-turbo V8 engine and an electric motor and battery. While specific power and torque figures are so far unconfirmed, we expect the powertrain to at least match the combined 690bhp of the rival system found in Porsche’s recently revived Panamera Turbo S E-Hybrid. 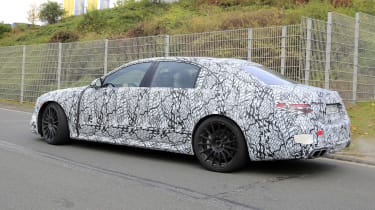 That’s because AMG’s new hybrid set-up is also expected to be found in the AMG GT 4-Door, giving Mercedes a like-for-like rival to Porsche’s flagship Panamera. Indeed, a hybrid powertrain was previewed by the AMG GT concept back in March 2017, where it had a claimed 793bhp.

The prototype in these images is clearly an AMG version of the new S-class, with a tell-tale grille applique and lower intake openings. The big wheel and tyre package, plus what look like a serious set of brakes behind, fill the standard car’s arches – S-class AMG models have typically had a completely standard body aside from the front and rear bumpers – while at the rear are a set of quad exhausts. 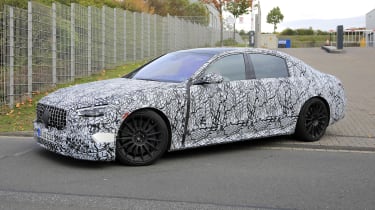 While these visual elements are typical of an AMG, what gives the game away about its plug-in powertrain is this prototype’s two fuel filler doors – one on either side of the body, one of which will be the charge point for the battery pack within.

While the S-class AMG has never been the most dynamic large luxury saloon, AMG’s engineers will still make good use of the latest S’s huge array of new technology and hardware for maximum benefit. Expect standard-fit air-suspension, Merc’s clever active body control that not only actively adjusts each damper but also leans the car into corners to counteract body roll, and a rear-wheel-steering system to ‘virtually’ shorten the wheelbase.

With all of this hardware comes a cost – which will likely be weight, and a large amount of it. Given the standard S-class already tips the scales at over 2 tons when fitted with the base six-cylinder engine and no hybrid elements, the AMG could well be approaching Range Rover mass. With a likely reveal date next year this new AMG S-class, alongside the eventual AMG GT 4-Door hybrid, are destined to be AMG’s first foray into the plug-in world, but we’ll have to see if they keep that AMG magic. 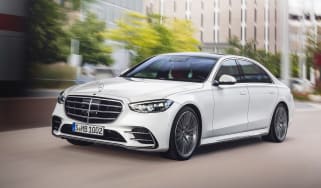