Even by AMG’s extreme standards, this is a spectacular machine 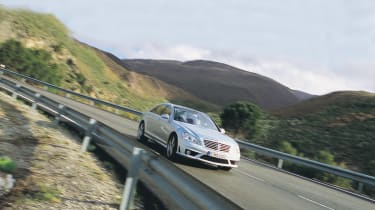 Even by AMG’s extreme standards, this is a spectacular machine. Based on the recently introduced all-new S-class, the S65 is officially the world’s most powerful series-production saloon. It’s also proof that, contrary to a well-worn stereotype, the Germans are in possession of a side-splitting, if warped, sense of humour after all. Don’t believe me? Well how else can you explain a mammoth, two-ton-plus saloon which, thanks to its hand-built, twin-turbocharged, 603bhp 6-litre V12, is capable of hitting 62mph from a standstill in 4.4sec before banging into its 155mph limiter with the ease that most cars hit a ton? Want more? Dig deeper into the specification and you’ll notice a small asterisk accompanying the claimed torque figure of an almighty 1000Nm (737lb ft in old money). What does it signify? ‘Electronically limited’, of course. That’s right – limited to a figure almost double that mustered by a BMW M5. All this motive force makes the S65 a truly extraordinary car to drive, as vivid and intense – in its own way – as any no-frills supercar. There’s very little I can say to evoke the sense of awe you feel at accelerating from walking pace to 155mph in one seamless rush, except that its more like an out-of-body experience than simple acceleration. Colossal torque requires a reinforced drivetrain, and the S65’s five-speed automatic transmission, driveshafts and hub carriers have all been beefed-up, while the shift strategies and torque-converter lock-up logic have been remapped to suit the V12’s Herculean outputs. If there’s one thing more impressive than the engine, it’s the way in which the S65’s chassis deals with the onslaught. The second-generation Active Body Control system keep things on as even a keel as possible, containing pitch under hard acceleration, dive under braking, and body-roll during hard cornering. It also automatically adjusts its spring and damper rates according to which transmission setting you have selected (Comfort, Sport or Manual). The first-generation ABC system, as seen in the CL55 and SL55 amongst others, was always effective at controlling the body movement, but struggled to maintain wheel control and lacked feedback. Now not only does the S65 display amazing poise, but the ride is more rounded and there’s increased feel through the steering. On dry tarmac it feels perfectly reasonable to disable the ESP system (although it’s never fully off) and balance the car on the throttle. Absurd as it might sound, when road and mood permits, the S65 can be hustled like a super-sized M3. When it comes to stopping the S65, AMG has wisely chosen to equip it with gargantuan 390mm front and 365mm rear composite brakes, complete with double callipers at the front. Stopping power is immense and remarkably fade-resistant, but it takes a long while to get used to the response, which isn’t as positive as you’d like during the initial pedal travel. Visually the S65 looks every metre the super-luxury, high-performance flagship, those exaggerated wheelarches filled convincingly by bold 19in five-spoke alloys, the S’s aggressive face and extended profile given increased definition and purpose thanks to larger air intakes and redesigned front spoiler and side-skirts. Badges on the front wings bearing the legend ‘V12 Biturbo’ certainly don’t do any harm either. Inside, there’s all the class-leading electronics and safety systems that set the S-class range apart from its rivals, while a sprinkling of AMG logos, a fatter steering wheel, supportive sports seats and an IWC analogue clock distinguish the S65 from the rest of the range. If you inhabit the real world, it’s very hard to justify a car like this. Even if you’re lucky enough to live in a parallel universe where a 603bhp, £145,000 saloon makes sense, it’s hard to imagine having the self-restraint to keep your licence for the duration of your first outing. However, until Bugatti decides to build something with four seats, driving this AMG monster is one of motoring’s ultimate experiences.