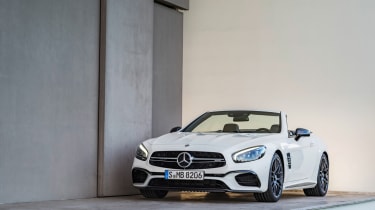 Images of the 2016 Mercedes SL have been leaked online ahead of its global unveiling at the LA Auto Show next week. The facelifted roadster has received a few styling tweaks inside and out, bringing its design more into line with Mercedes’ latest models.

The new car ditches the old model's angular headlights for curvier items, and a new front grille features softer edges than the current car’s. It also looks like the grille’s been flipped upside down, which works with a restyled bumper to give the new nose a more aggressive demeanour. 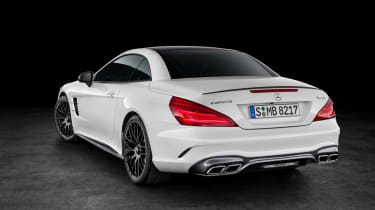 Mercedes’ flagship sports car, the AMG GT, is a clear influence for the new face, while the grille’s diamond pattern has been seen on models like the latest A-Class. Overall, the familiar nose ensures the 2016 car is more recognisable as a current-gen Mercedes.

Aside from a few anticipated styling tweaks, the 2016 SL is expected to be largely unchanged from the current car, meaning an AMG SL65 model with a twin-turbocharged V12 will still head the range. 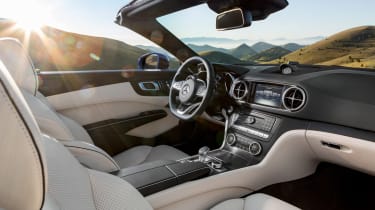 Our drives in the current SL65 confirm it’s as fast as it sounds, though its hefty 1950kg kerbweight ensures that we’d pick its sharper sibling, the V8 SL63. We’ll be interested to see if the 2016 SL range receives any serious mechanical updates – it wouldn’t hurt given rivals like the Ferrari California T and Bentley Continental GT Convertible have recently been refreshed.

More details will be confirmed when the covers are pulled off at the LA Auto Show next week. Check back here when they are – we’ll update this page with pictures and specifications as soon as they’re released. 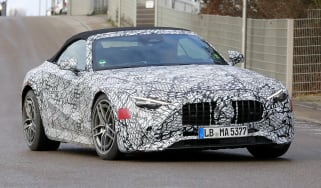