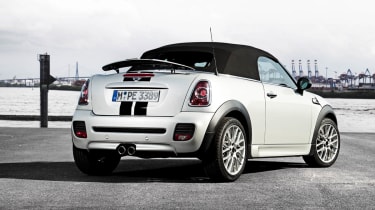 Mini has launched its new Roadster. Set to battle a bunch of rivals including the Mazda MX-5, entry-level BMW Z4s and the forthcoming Citroen DS3 drop-top, it’s essentially a roofless version of the new Mini Coupe. It becomes the sixth different bodystyle in Mini’s range. It eschews the heavy folding hard-top of some rivals, favouring a neat canvas roof. Unlike its four-seat Mini Convertible rangemate, the two-seat Roadster’s roof tucks completely away into the body, and doesn’t require an additional cover. It’s ahead of the bootlid, too, increasing practicality. Its operation is semi-automatic, and it cannot be raised or lowered while on the move; this is standard on UK cars, but Roadsters in other markets will be available with a more purist-pleasing fully manual roof. Its 240-litre luggage capacity is almost twice the 125-litre accommodation of a Mini Convertible with its rear seats in place, while the Roadster is identical to its Coupe sibling with its ‘through load’ facility, which accommodates a pair of skis pushed from the boot to between the seats. The rest of the Roadster’s make-up is business as usual for Mini, with the same engine range as the Coupe. £18,015 buys you a 1.6-litre Cooper (120bhp, 133g/km, 50mpg), £20,900 the sparkier, turbocharged Cooper S (181bhp, 139g/km, 47mpg) and £24,850 the range-topping John Cooper Works (208bhp, 169g/km, 39mpg). The JCW Roadster also becomes the priciest new Mini you can buy (before an options list workout, of course). Like the Mini Coupe, there’s also a diesel option. The £21,630 Cooper SD mixes 141bhp and 8.1sec 0-62mph performance with 118g/km CO2 emissions (i.e. £30 annual road tax) and 63mpg. Our only concern is how the SD engine’s mildly agricultural soundtrack will sound minus the roof. A six-speed manual gearbox is standard on all models, with the Cooper, S and SD boasting a six-speed auto as an option. The stiffened chassis from the Mini Convertible and Coupe remains, with Mini keen to point out that the Roadster’s lighter roof lowers its centre of gravity, benefiting dynamics. A typically overdesigned Mini interior (and its infamously large central speedometer) is present and correct. The Mini Roadster will be built alongside the Coupe in Oxford, with UK sales beginning in early 2012.

More pictures of the Mini Roadster