The hardcore Mini John Cooper Works GP is set to be hatchback only, and there'll be no Nurburgring record attempt 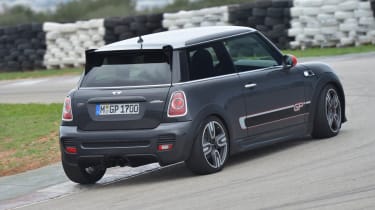 The Mini John Cooper Works GP will be made as a hatchback only. There have been spy shots of Mini Coupes believed to have more hardcore upgrades, and a two-door GP with sportier styling would seem a logical step forward for the brand. But the GP’s development chief Jorg Weidinger has all but killed off the chances of further GP variants, despite the heavy investment that’s gone into the special edition’s all-new suspension components and bespoke Kumho Ecsta tyres. ‘For the moment there are no plans to share these components with any other Minis’ Weidinger told evo. ‘The GP has history: it was a hatch, it is a hatch and it should stay a hatch.’

He also ruled out a chase for any Nurburgring headlines, despite the new GP lapping the Nordschleife substantially quicker than its predecessor, and its 8min23sec time hauling it towards the front-wheel-drive records set by various Renaultsport Meganes.

‘The Nurburgring was just for development. We did lap times during our runs, of course, and it’s 19sec faster than its predecessor. At the moment a record attempt is not planned.’