Is there a quicker way of getting your groceries home? 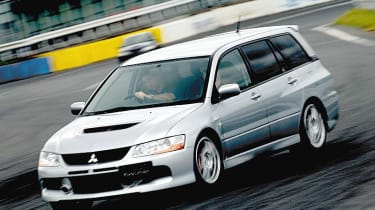 I don't know about you, but when I think of a wagon, I normally think of a car that's had the thrill factor turned down a notch or two. Not here. The Lancer Evolution Wagon is a fully-blown Evo in every detail. Dropped onto the same four-wheel- drive platform as the Evo IX, this luggage-lugger is about as extreme as they come.

Outside, it's no raving beauty with its Volvo-esque rear end grafted onto the chunky, sharp-edged Evo front. Inside the story's much the same. Except for the leather-wrapped gear-shifter and three-spoke steering wheel, and the supportive Recaro seats, bland grey plastic is the order of the day. Fortunately, when you fire up that 2-litre turbo it all starts to get rather more interesting.

The Wagon gets the same turbocharged 2-litre engine that debuted in the Evo IX saloon, complete with its sophisticated MIVEC variable valve timing system, but uniquely has the option of an automatic transmission to supplement the standard and excellent six-speed manual.

Mitsubishi tells us that the Wagon generates 276bhp, though after spending some quality time behind the wheel, we think something in excess of 315bhp is closer to the mark. From zero to 62mph, our stopwatch measured the Wagon at 4.8sec, just fractions behind the Evo four-door. 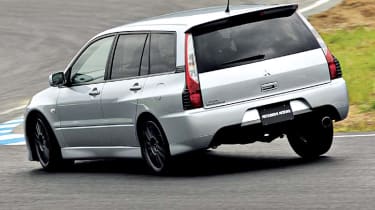 Bottom-end torque response is beefy and comes on hot and strong from 2500rpm, while at the top-end you can enjoy a deluge of free-flowing revs. That's the beauty of the MIVEC system, in that it allows you ready access to the considerable all that the engine has to give, but if you're stuck in slow-moving city traffic it gives you the luxury of shunt-free progress.

The six-speed manual has deliciously short throws and is ideally matched to the engine's torque curve. So how fast is the Evo Wagon? Around Japan's most popular race track, the 2.1km-long Tsukuba Circuit near Tokyo, it clocked an impressive 1min 7sec, a mere one second off the pace of its booted brother. And that's without one of the Evo's secret cornering weapons, Super AYC. More on that later.

Just like the saloon, the Evo Wagon employs MacPherson struts on the front and a multi-link on the rear with the same rally-bred body rigidity and Bilstein dampers added for good measure. And just like the saloon, the Wagon feels rock-solid in the corners with minimum body-roll, while the ride quality is noticeably better and more compliant than that of the Evo currently on sale in Europe.

But while the Wagon inherits the four-door's Active Centre Differential (ACD) with the three-way Tarmac/Gravel/Snow control, it doesn't get the Evo IX's highly-rated Super Active Yaw Control (AYC). One Mitsubishi engineer suggested that price was the probable reason for its omission, but we have a feeling that this car doesn't really need it. With its squared-off and heightened rear bodywork the wagon hauls an extra 70kg over the rear wheels, which works to improve the car's front to rear weight distribution. 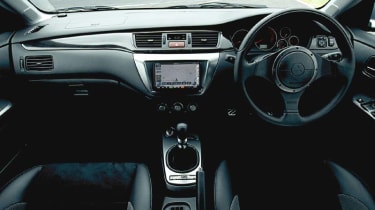 Throw it into a corner and the Wagon turns in fast as the extra kilos at the rear get the tail moving and the nose turned-in, while the front-mounted helical LSD and ACD keep the nose in check. At the limits of adhesion, either understeer or oversteer is there for the taking. With no AYC to get in the way of a good slide, and the extra rear weight making it easier to provoke rear-end breakaway, the Wagon can be chucked into prolonged power-slides all day long. And unlike the four-door, which 'floats' its rear inside tyre in tight, fast corners, you can actually feel all four tyres (Yokohama Advan AO46s) in contact with the road, even through the quick corners.

The Evo IX Wagon is without doubt the fastest- cornering wagon on the planet (at least until new versions of the Audi RS6 and RS4 Avants arrive to challenge its supremacy). The way you can whip it through corners faster than just about any supercar makes you feel as though you're ready to take on the likes of Petter Solberg. But as Mitsubishi plans to make only 2500 Wagons, none officially destined for export, I'm afraid it's another Japanese special that's missed the boat.