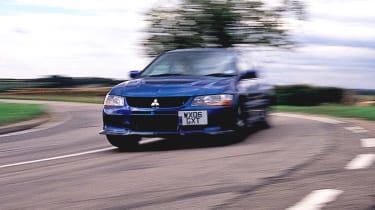 Devastatingly effective, brutally fast and fiendishly clever. But has the Evo got a personality? I’ve always been inclined to think not. It’s not a poster car, the engine sounds bland and the badge has only ever had the wrong sort of charisma attached to it. And yet I’ve just been driving the new FQ-360 and, despite the potential for this to get me consigned instantly (and some might say belatedly) to a straight jacket and the loony bin, I’d swear it was speaking to me…

The FQ-360 is the new pinnacle of the Evo IX range and is seen as something of a successor to the Evo VIII FQ-400. However, although it has taken both mechanical and cosmetic bits and pieces from the FQ-400, Mitsubishi is keen to stress that this time it has created a car that doesn’t behave as awkwardly as a toddler in a supermarket when you drive it.

The key to this is 363lb ft of torque produced at just 3200rpm. That’s 8lb ft more than the FQ-400 and 42lb ft more than the FQ-340, produced at a whopping 2300 and 1400rpm lower respectively. Power is also up, to 366bhp, and claims for the 0-60 dash are down below the four-second mark. The gains are thanks to a high-pressure fuel pump and high-flow catalytic converter filched from the 400, plus a rejigged ECU.

Adorning the body are a carbon front splitter and a shark’s teeth rear vortex generator (a row of spiky things above the rear window). The splitter adds a bit more menace, but I’m not so sure about the fishy dentine addenda. The Speedline Corse wheels are also unique to the FQ-360 and mimic the rims found on Mitsubishi’s tarmac-spec rally car.

Inside it’s businesslike as usual, with the fantastic hugging Recaros and the small Momo wheel. There is a new row of dials just below the radio that tell you all about battery voltage, oil temperature and boost pressure, although I’d be amazed if you ever wanted to look that far away from the road to watch the boost gauge swing round. One tip: if you don’t want leather – and you’re never going to make an Evo a luxury car – then you can save yourself £1000 off the list price by deleting it as an option.

On the road the most instantly impressive thing about the FQ-360 is how driveable it is. The delivery is progressive and fantastically well mapped, with what actually feels like a power curve rather than vertical takeoff. With things getting going just after 3000rpm, the mind-scrambling rush seems to last for slightly longer too. And if you want to you can even use a gear higher to stroke along just under warp-factor five. If that sounds boring then be aware that the ease with which the FQ-360 reaches and then sustains three-figure speeds is bordering on the obscene.

Importantly, the extra power takes nothing away from the chassis, which is unchanged and brilliant. Feeling the rear take attitude as you tip into a corner or sensing all four wheels scrambling around for grip through a fast sweeper is one of the things you should experience. And it’s then that the voices come…

The Evo starts whispering insidiously in your ear as the turbo spools up, the boost hissing ghoulishly. ‘Go on, just a bit faster. You can do it. That’s right – keep it pinned. Think how good it felt when we drifted through that fourth-gear corner. Let’s do it again! Forget the apex this time and nail the throttle early. Don’t be a chicken…’

No other car goads you on quite like an Evo. It’s like playground peer-pressure all over again. You get sucked in. It’s only when you eventually tear your vein-riddled eyes from the horizon to take in the absurd numbers on the amazingly unclear speedo that you wake up to the madness and slow down, swallowing with a dry throat and wondering if anyone noticed. But as soon as the revs rise beyond 3000rpm, the voices come again…

The FQ-360 has got personality alright, but at times I’m not sure which is more insane, the Evo or me.