Latest, fastest Evo X brings back some of the excitement missing from the model so far 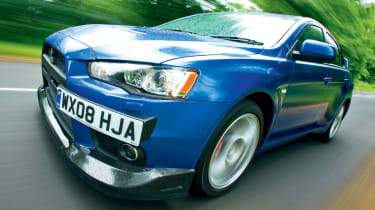 It’s true to say that we’ve not yet fully bonded with the Evo X. The shift from the addictive, balls-out, ultra-aggressive rally-bred dynamics of previous Evos to the more easily accessible character of the latest version has been something of a disappointment. Somewhere on the drawing board a little of the fire-breathing soul that has made the Lancer Evolution series such a cult was rubbed out. Simply put, it’s not the car we were hoping for.

Perhaps this, the FQ-360, will be more to our liking. Its badge suggests it totes 60bhp more than the standard FQ-300 for a start, and in fact it’s got an extra 64bhp – up from 290bhp to 354 – the extra fizz released with the help of an HKS breathing kit, a tweaked ECU and a new fuel pump that ensures the flow of super unleaded matches the engine’s ever insistent demands.

As with the FQ-330, the 360’s level of poke is deemed too much for Mitsubishi’s new twin-clutch SST transmission to handle, so this new model is also only available with a five-speed manual ’box. While this might be an unfortunate admission about the strength and durability of the new paddle-shift system, it’s not necessarily a loss, as although SST is slick and fast, it’s not particularly involving.

You might expect the manual gearbox’s five ratios to feel less tightly packed than the SST’s six, but in fact they seem just as short. First disappears almost the instant you move off the line on a full-bore run, and in mere seconds fourth has come and gone in a blur of rampant cog-swapping and kidney-thumping torque. Mitsubishi claims the 0-62mph sprint takes just 4.1sec and we’re inclined to believe it. 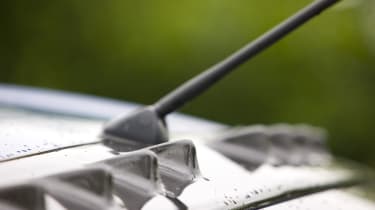 Be in no doubt, when it comes to acceleration this Evo has lost none of the breed’s bare-faced aggression. It’s just a pity the accompanying soundtrack is so plain. The old iron block, while never aurally pure, had a certain macho gruffness that has been lost with the arrival of the X’s new, 12kg lighter aluminium unit, which merely drones with increasing volume as the rev needle spins hard and fast around the dial.

That’s something the purest Evo owners won’t care a jot about, though. For these hardcore enthusiasts the only focal point is the car’s ability to dispatch the toughest B-road tarmac faster than your average supercar, and the FQ-360 still scores very highly here. Grip and traction levels aren’t just high, they’re faintly ridiculous, feeling utterly unshakeable even when you think you’re pushing hard.

Where previous FQs felt pointy and also movable at the rear, this one has its Yokohama Advans clinging to the asphalt four-square. Get really brave and eventually you’ll discover that the nose slides first. Lift now and the balance shifts spectacularly, requiring instant counter-steer correction and a slug of torque. If you’re up for it, it’s an awesome way to make some devastating progress.

The steering is light, particularly around the straight-ahead, and has lost a little in terms of detail compared to Evos of yore. The brakes too take a similar period of acclimatisation as there is little pedal travel and the huge Brembos (350mm discs front, 330mm rear) bite hard. At first it’s tricky to find the progression, but while it’s subtle, it is there. 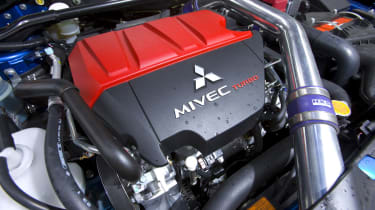 The FQ-360 commands an eight grand premium over the manual FQ-300, and at £35,499 it’s hardly cheap, but you gain more than a heavyweight punch. Externally it’s distinguished by an eye-catching (and possibly kerb-catching) carbonfibre front spoiler, while above the rear screen sits a row of eight small fins. Mitsubishi calls this strip a ‘vortex downforce generator’ (it increases and cleans the airflow over the rear wing, thereby improving its efficiency), but it’s probably best not to mention this down at your local.

Perhaps more important are the new leather and suede Recaro seats that firmly hold you exactly where you want to be. The driving position and body location are spot-on – vital when cornering forces are so extreme. And, of course, the interior is a big improvement over old-school Evos, even if the surfaces are still not as rich as those found in, say, a BMW. Pity the fuel tank remains frustratingly small at 55 litres, giving you a ridiculously short range if you’re having fun.

Overall, then, the FQ-360 is a qualified return to form. As a black-top warrior it resolutely gets the job done – there are gnarled roads where nothing will travel faster. But for us a few of those gritty teenage kicks are still missing. And that’s a shame.