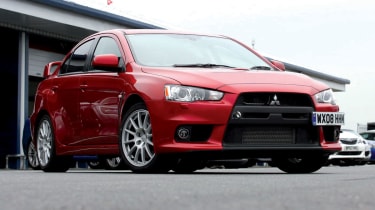 The latest Evo didn’t cover itself with glory in Henry’s twin test with the Impreza STI last issue. Thin power delivery, no steering feel, worrying glimpses of defaulting to the mainstream… these were not promising judgments. Has the Evo line lost its thread?

That same Evo X came straight from its test to join our Fast Fleet, complete with an industrial revolution’s-worth of brake dust and rather less rubber on its tyres than when it left Japan. And complete with dire warnings about its binge-drinking fuel thirst, something seldom mentioned in this magazine (‘pay up and enjoy’ is our usual take on liquid hydrocarbons, but even we were shocked).

Now I, reinforced credit card at the ready, am this Evo’s custodian for six months. I hadn’t read Henry’s test when I took custody, but I already had incomplete opinions of my own. Which were the opposite of Henry’s. I drove an Evo X on the UK launch at the Prodrive test track and thought it brilliant. Executing one of the most sustained and satisfying powerslides I have ever managed not to foul up helped this positive viewpoint. Never has a car second-guessed more accurately what I was hoping to achieve.

I first got into WX08 HHM straight after driving a new M3 saloon for a few days. There’s commonality of purpose here: four doors, massive pace, considerable expense (although at £32K the Evo is the thick end of £20K cheaper). The BMW had been annoying me with its springy driveline, viscous-but-dead steering, kidney-crushing seats and thick, claustrophobic pillars. Great on a car launch or on a track, it lost its allure when asked to be a daily driver.

The Evo X was a crash earthwards for cabin quality, with both dashboard and door casings formed from depressingly hard plastics. The dashboard squeaks, too, except on left-hand bends, so I’ll have to attack the joints with silicone spray. But it took just a couple of roundabouts for the bonding to begin, the Evo flicking through with astonishing speed and seemingly massless agility. It felt invincible.

Being an FQ-300 SST, this one has the lowest-power engine of the new Evo range plus Mitsubishi’s take on a DSG transmission, with bizarrely short gearing and a tardy take-off unless you nail it. Maybe that shortness contributes to the thirst – around 14mpg on the computer after the twin test, 19.6mpg driven deliberately gently between my first two fill-ups, exactly 10mpg at an evo trackday at the Bedford Autodrome. Where does all the fuel go?

But the Evo’s clean, crisp, mechanical-feeling steering is far more satisfying than an M3’s, its cabin is airier, and the SST works very well. The Evo was a delight at the trackday, although my attempt to reach an indicated 130mph at the end of the kilometre straight resulted in a couple of ragged corners immediately afterwards. Yes, I’m bonding with the Evo, and even feel a little defensive towards it. Strange what ownership can do, even when it isn’t really your own.