The Evo X is hilariously fast, but hard to live with and hard to love 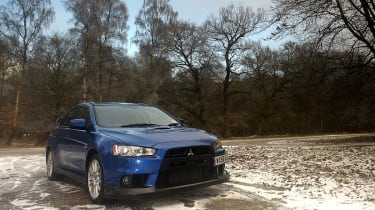 If you’re quite small and your daily commute involves three flying laps of the Silverstone Grand Prix circuit, the Evo X may very well be your ideal next car.

On the other hand, if neither of these things apply to you – and in my case they don’t – there are a few things I’ve already discovered about the FQ-360 that may make you hold off from spending the rather stiff £39,000 it takes to get one.

First of all, there’s the driving position. The main problem here is that the steering wheel doesn’t adjust for reach, so if you’re long of leg and slide the seat back to a comfortable point, the wheel is just too far away. Two months in and I’m still oscillating between having to stretch my arms or moving the seat forward and then feeling like working the pedals is doing painful and permanent damage to my knees.

It’s made even worse because the seat itself has an inexplicably aggressive and non-adjustable lumbar ‘support’ that gives you some idea of what it must be like to get shot in the back. This in turn is magnified by the Mitsubishi’s brutal ride quality. On many journeys, cross- country as well as trundling through the city, it will smack into a pothole with such a solid and unyielding bang that it actually makes you go ‘OOOF’, partly out of some mechanical sympathy and partly because you’ve just had your spine shortened again.

Obviously the upside of this fiercely stiff chassis is that on the right road the Evo X is magnificently quick, but even then you’re acutely reminded of LJK Setright’s sage observation that ‘what is good for ride is good for handling’. In other words, even the most exciting rollercoaster of a B-road can turn into a bit of a trial as the FQ’s rock-hard suspension snuffles out cambers and gets knocked off line by imperfections.

On the motorway this isn’t a problem of course. No, the problem here is that the gearing is dwarfishly short, making long distances noisy and exhausting. Still, at least you’ll get regular breaks as you’re forced to stop for petrol again. So far the furthest I’ve travelled is 248 miles before the small tank and ludicrous hunger for super-unleaded forced another fill-up. I’m sorry but how on earth have they made a 2-litre four-cylinder engine that won’t exceed 24mpg even when you drive like your Great Aunt? If you’re short shifting, avoiding hard acceleration and signally failing to get it on boost, what exactly is it doing with all that premium juice?

These irritants rather debunk the idea that rally specials like this offer 911 Turbo-baiting performance in a more practical, everyday saloon-car shell. Especially when even the mundane and saloon-ish elements of the Evo aren’t up to scratch. The climate control, for example, delights in making the car slightly too hot and then slightly too cold again. The sat-nav is so inept it would struggle to find a canal in Venice.    There’s no doubt that when you give it some stick the Evo X is almost hilariously fast and, in the right circumstances, a mind-bogglingly quick way to cover the wiggly line between point A and point B. But so far it’s also proving to be a hard car to live with and an even harder one to love.