Not two car you would initially think of in the same sentence, the Toyota GT 86 and Morgan 3 Wheeler offer similar levels of fun, in completely different ways 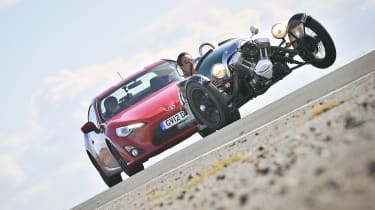 Toyota GT86 vs Morgan 3 Wheeler. It doesn’t have a natural ring to it, we’ll admit. They’re easy to pair together by ‘virtue’ of being eCoty 2012’s lowest powered cars, though, and while there’s a 117bhp disparity between the two, there are some key spec matches.

Morgan claims a startling 4.5sec 0-62mph time; someway ahead of the Japanese coupe’s 7.6sec, though the video below should give you some idea of how that actually plays out.

The biggest similarity between the two isn’t on their spec sheets, though; it’s the fun they allow at sane speeds, and the rewards and satisfaction they dish up for keeping your confidence – and their momentum – at a maximum. They’re the cars on eCoty that require most effort to make them go quickly, but they’re arguably the most fun when you do.