The BMW M135i is no ordinary hot hatch, but how does it stack up against the new Porsche 911 on track? 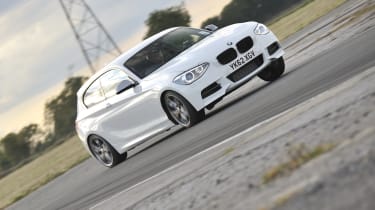 A heated-up 1-series against a thoroughbred sports car? Have we gone mad? Not really. The M135i is one of the very best fast BMWs of recent years, despite being an ‘M Performance’ model rather than a fully-blown M Division product. And the Porsche 911 is still picking its wounds a little, the new 991-generation car beaten in its debut group test at the start of 2012.

A spec table comparison fares the BMW well, too. It weighs 45kg more than the Porsche and possesses nearly 30bhp less, but with its in-line six-cylinder engine turbocharged (and the 911’s flat-six naturally aspirated, as tradition dictates), it boasts 332lb ft – 44lb ft more than the Carrera and enough for it to lag just 0.1sec behind in the 0-62mph dash (at 4.9sec).

Performance should be very close on track, then, and while price is far from a key factor at evo Car of the Year, the Porsche starts at £71,449, well over double the BMW’s £29,995. Could a giant killing be on the cards?