In this video, the £45k Porsche Boxster S goes head-to-head with the £53k Lotus Exige S on track 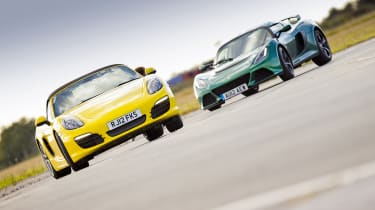 This should be quite a track battle. The Exige and Boxster are two of 2012’s best cars, qualifying for our Car of the Year extravaganza off the back of five-star reviews and some very convincing group test performances.

The Lotus strikes you as the more clearly track-focused car, with the looks of a mini Le Mans car and a barren interior, while the Porsche is comparatively plush and, thanks to its folding soft-top, immediately appears less hardcore. With Richard Meaden and Tiff Needell behind their wheels, though, it’s not as clear-cut as that. Watch the video below and see how much fun they both have…