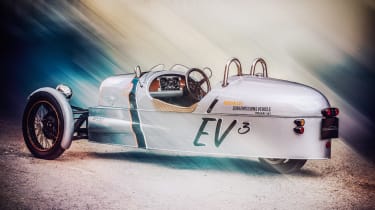 For a firm with over a hundred years to its name and a factory where history virtually drips from the walls, Morgan Motor Company is a surprisingly forward-looking manufacturer.

There’s no better indication of this than the car Morgan has just announced for this year’s Goodwood Festival of Speed – the EV3.

As you can deduce from the pictures, it is in fact a Morgan 3 Wheeler, but rather than the usual S&S V-twin found up front, the EV3 uses electric power.

It’s the second electric car prototype the company has developed, following 2012’s Plus E, launched at that year’s Geneva motor show. The Plus E was based on the company’s aluminium Plus 8 architecture, and like the new EV3, maintained the vehicle’s classic styling.

If anything, the EV3 is more of a shock to the system – losing the distinctive tailpipes that run along the 3 Wheeler’s flanks (creating quite a noise when awakened) and the pug-nosed appearance of the aircooled cylinders.

Instead, it’s powered by a 75kW electric motor at the rear wheel – that’s just over 100bhp, 20bhp more at the wheel than the standard car’s output. No range is quoted though it’s unlikely the 3 Wheeler has been able to accept many battery cells – particularly given that the car weighs less than its 450kg petrol-engined counterpart.

The model is set to go into production on a special-order basis towards the end of 2016. The company will release further details of the car when it makes its public debut at the Goodwood Festival of Speed.