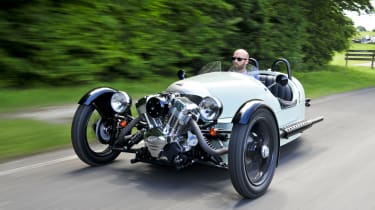 The Morgan 3 Wheeler starts at £25,950 (excluding VAT), with 12 colours and a choice of black or tan leather coming as no-cost options. The most expensive options are painted wheels at £835, and custom leather. Thankfully, the decals for the 3 Wheeler are quite cheap. Any car with 'Shark' (£229.17) or 'Bullets' (£95.83) on its options list is definitely worth a drive, if only for the attention you'll get from passers-by

In terms of rivals, there really aren't many. For raw open world thrills, a Caterham Seven 160 isn't far off. Its basic design is rooted in the 1950s rather than the 1930s, and it has a similarly modern powerplant - in this case, a three-cylinder turbocharged Suzuki engine from one of the brand's Japanese-market kei cars. Slim tyres mean outright grip is low, and it's also a fair chunk cheaper than the Morgan at £17,995 fully-built.

You might also consider the KTM X-Bow, Ariel Atom, Ariel Nomad, Zenos E10 S - the list of hardcore sports cars available around the £30,000 mark is nearly endless, though it's worth noting that all of the above would make more satisfying track day cars than the 3 Wheeler.

The Morgan does appear to be holding its value quite well, so a properly looked-after example shouldn't see you losing too much cash over a three or four year ownership period.