Destined to fight it out with the Audi Q5, Jag F-Pace and Volvo XC60 - BMW needs quite the car to overcome its new rivals 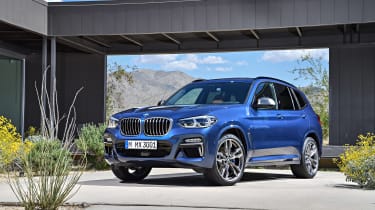 BMW has just introduced an all-new BMW X3, the brands mid-sized SUV and a popular choice in its class since 2004. The recipe has always been simple, to offer a solid and practical SUV with just enough BMW sparkle to boost its appeal to buyers. But with BMW’s ‘ultimate driving machine’ catchphrase becoming more and more symbolic in the line up, will the X3 prove to be just another premium SUV in the field or remain the driver's choice?

On first appearance, the X3 is off to a good start, and the new model wipes as much as 55kg of the previous models kerb weight. Not only that, the all-new model also maintains the old car’s 50 - 50 weight distribution, as well as offering an all-new performance-orientated M40i model. Pointed unashamedly at the Audi SQ5, the new model features a new 3-litre M Performance straight-six petrol engine with 355bhp and 369lb ft of torque. For context, these power outputs are almost identical to that of the Audi, not to mention it's priced at just £80 more, starting at £51,280.

> Click here to read our review of the new Audi SQ5 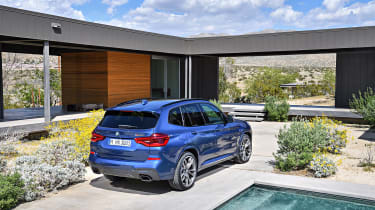 As for the rest of the range, BMW will initially be offering the X3 in diesel form only, with the carry over xDrive20d opening the range. An xDrive30d will also be available with the same new 261bhp 3-litre diesel engine as in the 530d saloon. To aid the new X3 dynamically, the new structure has been given a more heavily rear-biased all-wheel drive system, although with rivals like the excellent Porsche Macan and Jaguar F-Pace in the market, BMW will have to use its full box of tricks to overcome them.

Being an all-new model, the styling, or lack of depending on your viewpoint, has been 'completely redesigned' from the ground up. Penned by the same designer as the X1, the X3 draws on the smaller car for inspiration, but has maintained the kinked window line and overall aesthetic as the previous generation car. New LED lights front and rear help mark out this new model, as well as a bigger kidney grill. The new faceted grill is a motif we expect to spread amongst the BMW SUV range, as will the new horizontally situated LED front fog-lights.

Inside BMW has taken a big step forward from the outgoing X3’s interior, with another combination of new and existing X3 design elements. A new, large dashtop mounted screen is the biggest change, featuring the latest iDrive infotainment system, while a majority of the smaller switchgear is all shared from other BMW models. Overall, the interior design and ambiance is a major step up from the previous model, but with impressive rivals like the Volvo XC60 and Audi Q5 to compete with at even the lower level, BMW has had to significantly raise its game to keep up.

> Click here for our drive of the Porsche Macan GTS 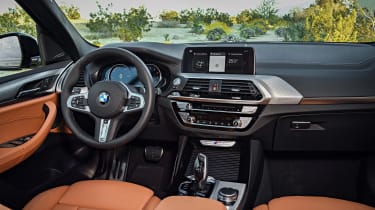 Tech-wise, BMW has bundled its various driver assistance systems into a new optional CoPilot system, offering the same semi-autonomous capability as in the BMW 5-series. Likewise, a new optional head up display is 70% larger than before and an interesting new Remote 3D function will beam a virtual three-dimensional image of your X3 and its surroundings to your smartphone if you so wish.

With prices starting at £38,800, the new X3 is priced just above main rivals like the Audi Q5 and Volvo XC60 and will reach dealerships in November this year. The burgeoning success of the premium mid-sized SUV is such that BMW decided not to take any major risks in the X3’s re-imagination. The all-new BMW X3 will doubtless be an impressive car, but whether it can transcend BMW’s core selling point strongly enough will be a question we will not be able to answer till we get behind the wheel later this year.