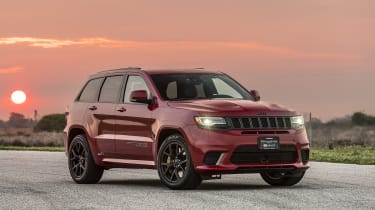 The ‘lowest-powered’ HPE850 tuning package fiddles with the standard Trackhawk’s ECU, adds a high flow air intake system and upgrades the supercharger pulley to produce a higher 14psi of boost. Thanks to these updates, the upgraded Trackhawk will hit 62mph in 2.9secs, the same as a £2.2m Aston Martin Vulcan. The quarter-mile time is a quoted 10.9secs at 124 mph.

The intermediate upgrade is HPE1000 helping produce, you guessed it, just over 1000bhp and 969lb ft of torque. Further modifications to reach this power output are required, comprising larger capacity 4.5-litre supercharger, high-flow fuel injectors, a fuel pump upgrade, new ECU, high-flow air intake system and more. Performance figures come in at 2.7secs for the 0-62mph sprint, and the quarter mile comes in 10.7secs at 132mph. 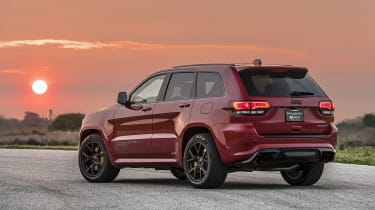 The final, and most powerful package is HPE1200, giving the family SUV a monstrous 1003whp or 1183bhp from the crank, with torque rated at 1000lb ft. As you might imagine, some quite significant modifications are required for this much power. Adding to the same upgraded 4.5-litre supercharger from the HPE1000 package is an upgraded pulley, a modified throttle body, a selection of forged internals within the engine block, a new high-flow exhaust system and more. These additions result in a quoted 0-62mph time of just 2.3sec, making it one of the most accelerative cars on the planet, in line with the Bugatti Chiron. The quarter mile is covered in a quoted 9.6secs at 145mph, and it’ll carry on to over 200mph if the tyres don’t explode first.

What isn’t part of Hennessey’s upgrades is the chassis, which one might argue was already quite close, if not already over its comfort zone in standard Trackhawk form. It’s also worth noting the Grand Cherokee’s underlying chassis is one able to be traced back to a mid-naughties Mercedes ML. 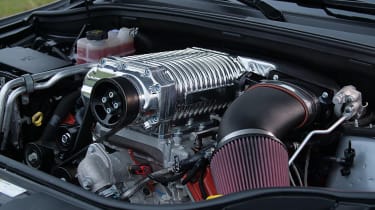 All performance figures are based on times recorded on a prepped drag strip with drag radial rear tyres, so smoking all four wheels from the traffic lights is probably possible, if not really recommended. Pricing details for the packages can be provided upon request.