Still not put off by the new 1-series? BMW’s official M Performance accessories may be just your thing 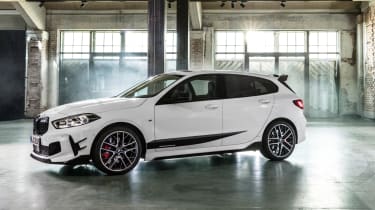 Had time to digest the new, front-wheel drive, six-cylinder-less BMW 1-series yet? No, nor us, and it’s not solely because of the aforementioned characteristics being a departure from the previous models.

It’s also among the more challenging shapes BMW has unleashed upon us recently, and that’s despite strong competition from the likes of the facelifted 7-series, gargantuan X7 and hunchbacked X4.

What it lacks in proportions (and details, and six-cylinder sound, and enthusiast appeal) it should at least gain in practicality and running costs. BMW will surely make it drive well too, but Munich has already announced details of a series of M Performance parts that endow the awkward-looking hatch with a little more attitude. 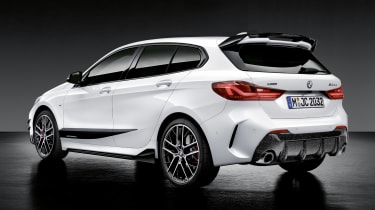 The parts are, for the time being at least, purely visual – you’ll need to wait for AC Schnitzer or the like to come up with tuning parts if you want more than just an appearance package. The catalogue starts with wind tunnel-developed carbonfibre components including a front splitter, rear spoiler and dive plane-style components.

These are complemented by new sill skirts and a rear diffuser, with the additional option of gloss black door trims – all topped off by a black mesh take on BMW’s new conjoined kidney grille.

Next up is new rolling stock, with a choice of 18- and 19-inch forged alloy wheels, the former in a Y-spoke design and the latter a double-spoke item. Confusingly, BMW also offers an 18-inch M Performance sports brake kit which is apparently compatible with the 18-inch wheels, so we imagine this is a brake kit designed to work with 18-inch wheels rather than one that’s 18 inches in diameter. Front discs are vented and drilled and clamped by four-pot calipers, and the rears each use a single-piston floating caliper. 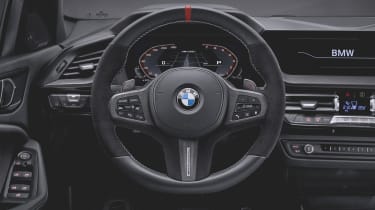 Open the door and you’ll notice new LED projector lights to emblazon M Performance logos upon the ground – for an ‘exclusive, distinctive atmosphere’ no less.

Once inside there’s an Alcantara-trimmed steering wheel (‘genuine racing feeling’) with a red centre marker, or optional Alcantara/carbonfibre or leather/carbonfibre wheels, with carbonfibre shift paddles if you pick the automatic transmission.

Velour M Performance floor mats are also available, but for the time being that’s all that’s on offer. Expect to see the whole lot stuck to a debadged 116d when the new 1-series – full details of which can be found here – goes on sale later this year.