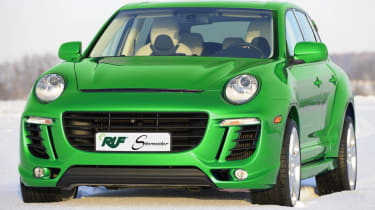 Ruf has produced some cracking cars in the past – the CTR Yellow Bird is particularly legendary – but the company appears to have answered a question we'd wager no one’s really asked with this, the eRuf Stormster. The German brand is known for its rebodied Porsches, which traditionally come in the form of more powerful 911s. This, though, is a plug-in electric Cayenne SUV. Oh. It’s not particularly pretty, though you can’t deny it boasts presence. Power comes courtesy of a Siemens electric motor, producing 270kW (the equivalent of 362bhp). That’s not a lot when you take into account the Stormster’s 2670kg weight, the result being a 10sec 0-62mph ‘sprint’. That’s a smidgen slower than the Ruf CTR3 we’ve driven… Of course, performance isn’t the major aim of plug-in cars, something the Stormster’s 93mph testifies. Its range is more key, Ruf claiming 125 miles on one charge. The juice is stored in a plethora of Li-Tec lithium ion battery cells. It's the same system that's used in Ruf's first 911-based electric car. The Stormster is currently on display at the European Climate Change Conference in Copenhagen – the obvious place to give a 2.6-ton Porsche-based SUV its world debut – and will be there until December 18. Let us know what you think on the forum. Click to read about a proper Ruf – the Yellow Bird Read our review of the Zonda-baiting CTR3 hypercar Follow evo on Twitter for the performance car latest