What will be evo's Car of the Decade? Vote on your favourite from 2004: Exige, Clio Cup, Boxster and Elise R 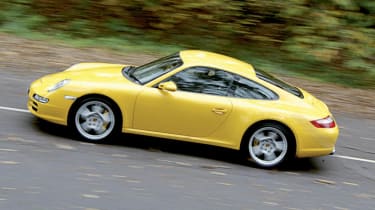 Today’s the turn of 2004. Peruse the performance cars below and get voting this way. The link takes you to the community, where if you scroll down to the bottom you’ll find the voting panel. Head to the Forum if you want to do more than click…

Porsche 997 Carrera S (click the car names for content)The fifth 911 victory out of seven eCoty contests, this being the first one for the 997. There’d been concerns that the new generation of rear-engined Porker would lose the car's challenging (but rewarding) nature, but despite the closest ever Car of the Year finish (and a very tightly separated podium), the 911 clinched it again. ‘No normally-aspirated 911 has ever felt this muscular’, we informatively said. ‘Oh God. The 911 is bloody brilliant. Again’ was a blunter observation.  Lotus Exige S2Joint second with the car below, the Exige had to do well because Meaden had just bought one. And he wrote the big eCoty 2004 feature. Don’t smell a rat, though, as the Exige came within a whisker of the gold medal with good reason. ‘Look up ‘Thrill of Driving’ in the dictionary and it says ‘see Lotus Exige’’ was one comment, while Dickie’s (obviously unbiased) view was ‘it’s a truly enthralling car, more specialised and, yes, less complete than the Elise in some ways, but that’s what makes it more desirable, more exotic.’ Renaultsport Clio 182 CupAlmost as common as 911s on eCoty podiums are Renaultsport hot hatches. A year after the ballistic V6 occupied third spot, the hardcore (but more conventionally front-wheel drive, front-engined) 182 Cup sneaked a joint second placing. ‘The best hot hatch ever, unequivocally’ said John Barker. Like a yappy little dog, it was snapping at the heels of the supercars throughout eCoty and biting harder than they were expecting, too. Porsche BoxsterIt may not have looked much different to the first-generation car it replaced, but the new-school Boxster was bloody impressive, and just missed a spot on the podium. ‘The chassis has a delightfully alert, tip-toe feel without getting all snappy and ‘mid-engined’ on you, while the engine sings a grittier, more memorable song.’ The Boxster mixes the Porsche 911 ownership experience with Lotus Elise tactility. Lotus Elise 111RSpeak of the devil, and an Elise will appear. Or something. Rounding off the two-Porsche, two-Lotus top five of 2004 is the Elise 111R. ‘The Elise is rapid and rewarding like few other cars at any price’, said Dickie Meaden. ‘It feels alive in your hands, supple yet taut, poised, polished. Special’. For an Elise to impress so much when the model was knocking on for being a decade old, that’s quite something.

So, they’re your contenders for 2004. Click here to vote for your favourite and use the eCotd Forum thread to air your opinions or tell us about cars that should be here. And don’t forget to come back tomorrow (yep, Christmas Day) for the best of 2005… Follow evo on Twitter or join our Facebook page